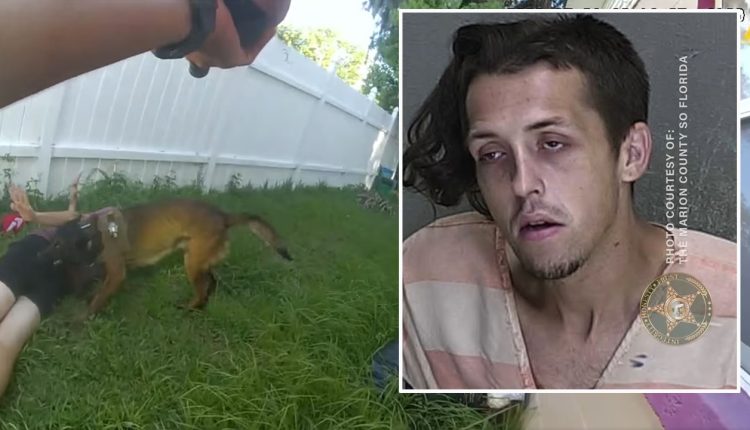 A Florida K-9 caught an accused car thief in its jaws of justice last month during a foot chase that ended with the suspect begging deputies for help, according to bodycam video released Friday.

Deputies were alerted to a stolen vehicle around 4:30 p.m. on July 31 in Ocala, the Marion County Sheriff’s Office said.

K-9 Cpl. Calvin Batts located the stolen vehicle in the area of Southeast 32nd St. and Southeast 3rd Ave. and tried to conduct a traffic stop, the sheriff’s office said.

The suspect, later identified as 29-year-old Matthew Gebert, sped away before later coming to a stop and fleeing on foot, according to authorities.

Batts’ K-9 partner, Jax, apprehended Gebert after a short pursuit, grabbing hold of the suspect’s rear end and holding him on the ground, according to bodycam video.

“Get him off, please!” the suspect begs the deputy.

The suspect can be heard begging the deputy to call K-9 Jax off after getting caught.
(Marion County Sheriff’s Office)

“Don’t fight,” Batts says. “Soon as I get you in handcuffs, soon as the dog goes off, OK? Hold on buddy, hold on.”

Gebert was taken into custody and found in possession of cocaine and drug paraphernalia, the sheriff’s office said. He also had a suspended driver’s license and was on active felony probation.

Gebert faces charges of grand theft of a motor vehicle, fleeing to elude a law enforcement officer, possession of cocaine, possession of drug paraphernalia, resisting without violence, driving without a valid license, and violation of probation.

Gebert was being held at the Marion County Jail without bond.