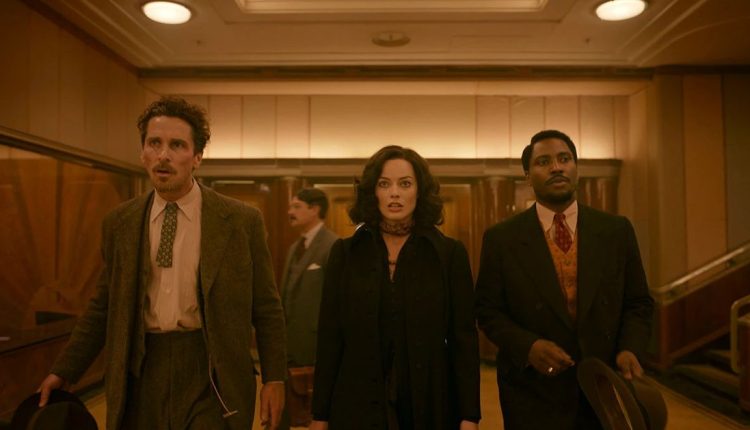 One recent Sunday night, I found myself at the premiere for Amsterdam, a movie for which the word “star-studded” is too modest. Having avoided trailers to that point, I didn’t realize what I was in for until director David O. Russell appeared onstage to introduce the movie and some of the cast. At these events, the more minor cast members are usually introduced first. “Please welcome … Timothy Olyphant!” Russell said. Clad in cowboy boots, a scarf, and a rakish hat, Olyphant loped onto the stage.

Well, if this was the most minor character, then I was in for something.

Then the movie started and I realized, quickly, that this was just a fraction. Alessandro Nivola is in this movie. Chris Rock pops by a few times. Matthias Schoenaerts weaves in and out, as does Zoe Saldana. Anya Taylor-Joy shows up. For Pete’s sake, Taylor Swift is in this movie.

So far I haven’t told you a single thing about the movie other than its cast. But it barely matters. Some time ago, the studios figured out that they could create marketing buzz, practically without paying for it, by simply “leaking” casting news to the press. It doesn’t even have to be accurate; it just has to be picked up, reminding potential ticket-buyers that the upcoming film project exists. In an age dominated by existing IP movies — from comic book universes to reboots of characters you’ve loved forever — the excitement of seeing a new actor in a familiar role is enough to generate a headline. Or at least a tweet.

This feeling of worlds colliding started to extend beyond IP movies and into original fare, as long as fans can still experience the thrill of seeing all their famous friends in one place. That has little to do with the actual quality of the film; plenty of terrific actors have been in abysmal movies. (Remember the tricked-out cast, led by Michael Fassbender, of The Snowman?)

And Amsterdam is pretty good, in part because these actors are enjoying being in a period romp. It’s the story of three friends (Bale, Washington, and Robbie) who met in the aftermath of World War I — in, yes, Amsterdam — and formed a friendship that broke apart when they all left town. Twelve years later, the tide of fascism is rising again in Europe, and the trio finds themselves unexpectedly reunited, thrust into the middle of a world-historical plot. (“A lot of this really happened,” the movie’s opening titles proclaim.)

Amsterdam’s rhythms never quite gel, thanks in part to an ill-advised flashback structure. But it’s lush and clever and vaguely relevant to our own headlines, and overall, a good time at the movies.

Yet it clearly draws most of its appeal from the familiar faces that appear onscreen, like quite a few other films this year. The upcoming Glass Onion: A Knives Out Mystery is a blast on its own, as expected, but it wouldn’t be half as hotly anticipated if it didn’t have such a huge cast of A-listers (Edward Norton, Janelle Monae, Kathryn Hahn, Kate Hudson, Leslie Odom Jr., Dave Bautista, Jessica Henwick, and, of course, Daniel Craig). That’s part of the heritage of certain detective stories; it was echoed in the considerably less fun See How They Run earlier this year (Saoirse Ronan, Sam Rockwell, Harris Dickinson, Adrien Brody, Ruth Wilson, Shirley Henderson, David Oyelowo, Sian Clifford, I could keep going).

Bullet Train’s massive appeal was partly due to its formula, but mostly its cast (Brad Pitt, Bad Bunny, Aaron Taylor-Johnson, Joey King, Logan Lerman, Brian Tyree Henry, Zazie Beetz, Michael Shannon, and a bunch of fun cameos I won’t spoil). I have not yet seen Babylon, from La La Land director Damien Chazelle, but in December we’ll get to trundle into theaters and see Pitt, Robbie, Jean Smart, Olivia Wilde, Samara Weaving, Max Minghella, Tobey Maguire, Katherine Waterston, Spike Jonze, Jeff Garlin, and a bunch of other actors swim the waters of Hollywood’s decadent early decades. And next year, Christopher Nolan’s Oppenheimer has a cast so overstuffed that I can’t even name them all here.

It’s not that mega-star movies haven’t made their appearances in Hollywood before; take all iterations of the various Oceans movies, for instance. The films of Robert Altman, like Nashville, Short Cuts, and Gosford Park, often employed massive casts; his protegee Paul Thomas Anderson likes to do the same in films like Boogie Nights, Magnolia, and Licorice Pizza. Recent years have seen anthology movies like The French Dispatch or the many-interwoven-stories films kicked off by Love Actually. Throw a rock into film history and you’ll hit a big cast list.

Still, this year, it has felt especially significant. Some of that, undoubtedly, is for practical reasons. With a huge cast, each actor generally takes up less screen time. With Covid protocols in place, it might seem counterintuitive that a big primary cast could be easier to handle, but actors often show up for just a few days to shoot out their scenes, and then they can leave, which could in theory cut down the risk of any one actor breaking out of the “bubble” and getting Covid-19. (And if they do, it might be easier to rejigger the schedule and not waste days.)

It’s convenient for actors, too, even without Covid in mind. Shooting for a few days or weeks is easier than committing to a months-long shoot, and it frees the calendar to pick up other work.

For audiences, the effect is more than just amusement. You get the sense, watching a movie like Amsterdam, that this whole world is familiar to you. You belong there because you know these people. It’s comforting, soothing, fun to watch and rewatch. You know, going in, you’re in good hands.

But I can’t shake the idea that the plethora of cast-of-thousands movies right now is the effect in a gargantuan cause-and-effect relationship. And I think the cause is Avengers: Endgame.

Remember, this was the ultimate crossover event, where all the stars you’d been watching in the great big cycle of the MCU for decades finally were in a movie together. Perhaps you remember, or were part of, the cheers that went up when all the characters finally showed up on the field of battle together. By now, even the ones who hadn’t been stars when they entered the MCU were surrounded by their own megawattage. The effect was electrifying.

And it translated to dollars, which in Hollywood is what matters. Avengers: Endgame is still the second-highest-grossing film of all time (the first is Avatar). It’s a gold standard for blockbusters. In Hollywood, whatever makes money spawns imitations. So you can imagine that even directors making original films manage to get them greenlit by studios by suggesting a top-heavy cast.

Is the phenomenon bad? No, not really. I like watching Knives Out as much as the next person. But you do have to wonder if it’s harder for new stars to fight their way up the ladder when even minor supporting roles are filled by known faces. Many of today’s “stars” are character actors at heart, and they’re good in the roles. But the sense of discovering a new face gets harder and harder.

All that can’t diminish the pleasure of watching Taylor Swift strut onto the screen in Amsterdam, or Kathryn Hahn smirk her way through Glass Onion. Movies, after all, have long been about the stars. Now, more than ever.

Amsterdam opens in theaters on October 7. Glass Onion: A Knives Out Mystery opens in select cinemas in November and on Netflix on December 23.