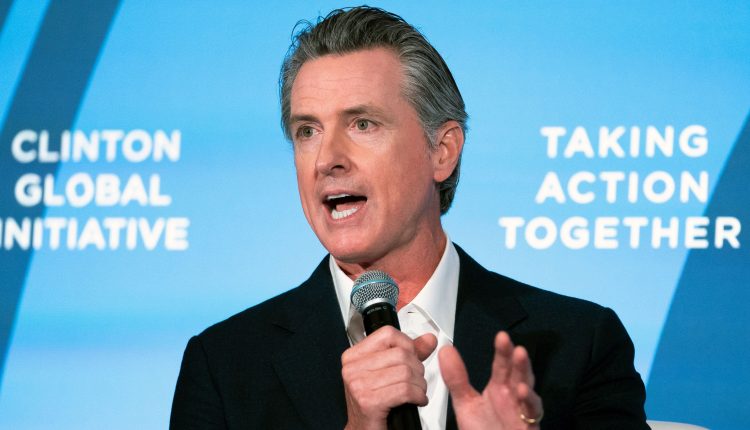 California Gov. Gavin Newsom called for an overhaul of Democrats’ political strategy on Saturday, saying the party is “getting crushed” by Republicans in part because they are too timid, often forced to play defense while Republicans “dominate with illusion.”

But he said that mantras that may have worked for the party in the past — like Michele Obama’s famous quip “when they go low, we go high,” — simply don’t work today because “that’s not the moment we’re living in right now.”

“These guys are ruthless on the other side,” Newsom said. “Where are we? Where are we organizing, bottom up, a compelling alternative narrative? Where are we going on the offense every single day? They’re winning right now.”

Newsom said that’s why — even though he is running for reelection as governor of California — he has been spending some of the millions of dollars in his campaign account on TV ads in Florida urging people to move to California, newspaper ads in Texas decrying the state’s gun laws, and putting up billboards in seven states urging women to come to California if they need an abortion.

“There’s nothing worse than someone pointing fingers. What are you going to do about it?” Newsom said. “The reason we’re doing those ads is because … the Democratic Party needs to be doing more of it.”

Of course, the main reason Newsom can do those things is because he faces little pressure at home. Newsom is likely to cruise to a second term as governor of California in November, facing a little-known and underfunded Republican challenger one year after defeating a recall attempt.

“I cannot say it enough,” he said. “I never trust politicians, so I get why you keep asking.”

Newsom said that President Joe Biden’s first two years in office have been “a master class … on substance and policy.” But later, he said good governance, by itself, is not enough to win elections — adding that “otherwise Biden would be at 75% approval.” In reality, about 53% of U.S. adults disapprove of Biden, according to the most recent poll from The Associated Press-NORC Center for Public Affairs Research.

The problem for Democrats, Newsom said, is that they “fall in love so easily” with “the guy or gal on the white horse to come save the day.”

“We missed a more important paradigm that leadership is not defined by that person in formal authority, it’s defined by people with moral authority every single day,” he said.

Newsom’s aggressiveness could end up helping Abbott, who is locked in a more competitive race with former Congressman Beto O’Rourke. Kenneth Grasso, a political science professor at Texas State University, said there has been concern among some in the Republican Party that Abbott is “not conservative enough.” Newsom’s attacks against Abbott “only helps him with those people,” Grasso said.

“If you stress that they’re right-wingers, you call them extremists, using that kind of language, all you are going to do is enhance their popularity in their own base,” he said.

Despite that risk, Texas Democrats seem to be welcoming Newsom’s attention.

“I like this guy,” Texas Democratic Party chair Gilberto Hinojosa said of Newsom. “I like the way he’s showing the contrast between what y’all do in California and what the narrow-minded, extremist positions that occur here in the state of Texas.”

The Republican Party of Texas did not respond to an email seeking comment.