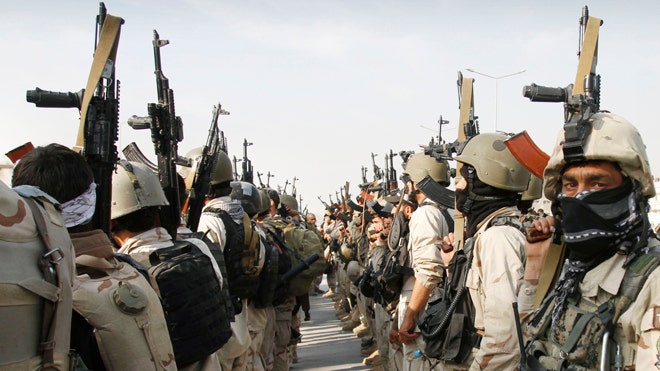 A former special forces commando with the Afghan national army spent months evading Taliban capture after the final U.S. troops left Afghanistan, eventually finding his way to the U.S. border in Texas, where he has since been detained.

“We view members of Afghan special forces as part of our community,” Steve Patterson, a member of the Special Operations Association of America, told the Texas Tribune in a report Wednesday. “We’ve been looking at finding paths to citizenship for them, looking at the federal level, but there’s not as much energy on [Capitol Hill] to get these things passed that we’d like to see.”

Patterson’s comments came as the Tribune reported on the case of Abdul Wasi Safi, a veteran of Afghanistan’s elite special forces who fought alongside U.S. troops in Afghanistan against the Taliban. Safi is now detained at the Val Verde Correctional Facility in Texas after a harrowing journey to the U.S., hoping the country he fought alongside will consider his case for asylum.

“Hearing stories like this is the exact reason we want laws changed for the better,” Patterson said.

Afghan special forces hold their guns after a gun battle near the Afghan parliament in Kabul, Afghanistan.
(AP Photo/Ahmad Jamshid)

Safi’s brother, Sami-ullah Safi, worked with the U.S. military as an interpreter for special forces until 2015, when he was awarded a Special Immigrant Visa and moved to Houston. Even after making a new life in the U.S., Sami continued to travel between the two countries. He was finally granted full U.S. citizenship last year.

However, Abdul has not been so lucky. Because he was a member of the Afghan military and not paid by the U.S. government, Abdul does not qualify for the same type of visa his brother received in 2015. Instead, Abdul will pin his hopes on claiming asylum in the United States.

Abdul’s harrowing journey began over a year ago, when U.S. forces made their rapid exit from Afghanistan. Members of his unit were told they had a choice to either stay in Afghanistan and fight with local militias against the new Taliban regime or try to catch one of the remaining U.S. evacuation flights out of Afghanistan.

The former Afghan commando attempted to catch one of those flights leaving Hamid Karzai International Airport in the final days of August 2020, but was unable to get access to the airport. When the final U.S. troops departed the country, Abdul went into hiding amid threats that the Taliban were hunting down people like him and executing them.

He spent the first few months keeping a low profile with members of his family, then struck out on his own. With the U.S. Embassy in Kabul shut down, he could not apply for a U.S. visa in Afghanistan and instead would have to travel to Qatar to apply for one in person. He lacked the necessary visa to travel through Iran or Pakistan to get to Qatar, leaving him with few options.

His situation became desperate as the Taliban closed in on and arrested or executed people he had served with, causing his Sami to spend over $1,000 to get Abdul a visa that would allow him into Pakistan. The brothers then heard that Brazil was offering humanitarian aid visas, which Abdul applied for and received.

An Air Force aircraft takes off from the airport in Kabul on Aug. 30, 2021.
(Photo by AAMIR QURESHI/AFP via Getty Images)

From there, he was forced to travel back to Kabul so he could board a flight for Brazil, narrowly avoiding detection at Taliban checkpoints along the way. Shortly after arriving in Brazil, he decided to join a large caravan of migrants across South America to the U.S. border.

The group crossed through Colombia and reached the Darién Gap, an infamous 60-mile stretch of roadless and uninhabited jungle that has claimed the lives of many migrants on similar journeys.  Of the roughly 300 migrants who traveled through the gap with Abdul, 16 of them died along the way.

Abdul safely reached Mexico and then joined a group of 30 other migrants who paid a smuggler to take them by truck to the Mexican-U.S. border. Once there, the group crossed the shallow Rio Grande Sept. 30 and reached Texas. He was spotted by U.S. Border Patrol agents, who he then approached and told that he was seeking asylum.

A general view of the Rio Grande in Texas.
(REUTERS/Marco Bello)

He was apprehended and interrogated by federal agents. He was then transferred to the Val Verde Correctional Facility and charged with a misdemeanor for failing to present himself at a port of entry. He was denied bond in October, despite Sami offering to shelter his brother while his case was pending.

“I think my brother is the first in my whole tribe to be in chains, ever,” Sami said after seeing his brother at his detention hearing. “It was very difficult to see him like that. He’s not a criminal. Why are they treating him like he has done something wrong?”

Denise Gilman, the director of the immigration clinic at the University of Texas School of Law, told the Tribune that Abdul will likely be able to receive an asylum hearing after the charges against him are sorted out, but the possibility remains that he could be deported to Afghanistan.

The uncertain situation for his brother has been frustrating for Sami, who told the Tribune the U.S. has abandoned those that fought alongside it in the nation’s longest war.

“It was unfair, unjust, for the U.S. military to leave all the people who put their lives on the line working for the military and in the end leaving them to be slaughtered by the Taliban and closing their eyes on them,” Sami said. “Pretending nothing happened. People have done so much.”

However, Sami remains hopeful that the U.S. will consider his and his brother’s service when considering Abdul’s case.