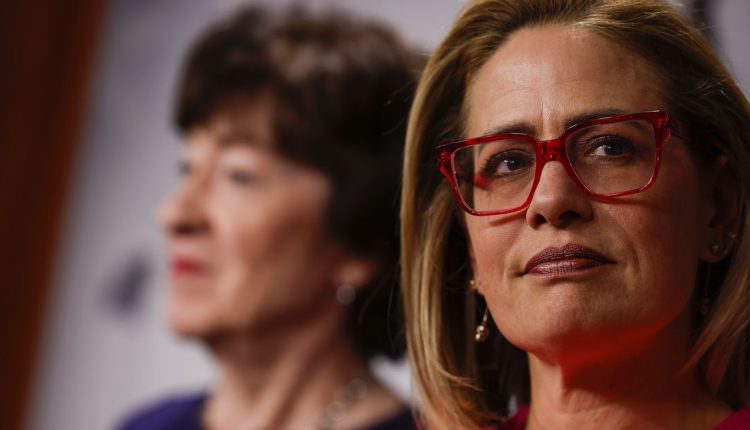 The Senate is reportedly weighing a new bipartisan immigration reform framework that involves concessions from both Democrats and Republicans, but also has a number of provisions that could ultimately doom it. The deal trades increased border security for relief for immigrants who are already in the US, but lawmakers are running out of time to pass it before the end of the year.

The framework for a potential bill is the product of negotiations between Sen. Kyrsten Sinema (D-AZ.) and Sen. Thom Tillis (R-NC). According to a summary in the Washington Post, it would give Democrats a long-sought path to citizenship for more than 2 million “Dreamers” who immigrated to the US as children without authorization. That would add $1.2 trillion to GDP over a decade and $235 billion in net fiscal contributions, as estimated by the Niskanen Center, a libertarian think tank.

Republicans would get additional border security resources and at least a one-year extension of the Title 42 policy, which has allowed the US to use pandemic-era health rules to quickly expel nearly 2.5 million migrants who have arrived on the southern border since 2020. The Government Accountability Office would have the authority to end the policy, ostensibly after the government can establish new migrant processing centers on the border.

The framework would also provide funding to accelerate the processing of asylum seekers, including for those processing centers, and to hire additional asylum officers and immigration judges. And it has provisions that would allow migrants who aren’t eligible for asylum to be quickly removed. Currently, the process of adjudicating an asylum claim typically spans months or even years: Existing asylum cases have been pending for an average of 785 days as of October, according to data from the Transactional Records Access Clearinghouse at Syracuse University.

Though the framework is a mix of Democratic- and Republican-supported policies, it also has a few potential dealbreakers, including the preservation of Title 42. Given that it would need at least 60 votes to pass the Senate under the filibuster, that doesn’t bode well for its prospects, especially because it’s under a time crunch. There’s less than a month left before the new Congress begins on January 3.

“If we’re not able to reach agreement on some of the more stringent border security issues this week, then it’s difficult to see how we can get it done,” Tillis told Roll Call.

Key Republican lawmakers are so far hesitant to endorse the framework

Republicans have previously opposed opening up a new pathway to citizenship, and there’s no sign they’re suddenly willing to do so now, particularly given how the GOP has sought to use immigration as a political cudgel against President Joe Biden.

Sen. John Cornyn (R-TX), one of the authors of the 2013 “Gang of Eight” immigration reform bill that passed the Senate but failed in the House, told Bloomberg Monday that “until the Biden administration owns up to its responsibilities on the border, it’s not possible to pass an immigration bill.”

Beyond calls to be “tougher,” it’s unclear exactly what Republicans want the Biden administration to do at the border. A House GOP memo released ahead of the midterms detailed plans to “fully fund effective border enforcement strategies, infrastructure, and advanced technology to prevent illegal crossings and trafficking by cartels,” as well as “end catch-and-release loopholes, require legal status to get a job, and eliminate welfare incentives,” without calling for any particular spending amount.

But those policy proposals were vague, and that seems to be by design, giving individual Republicans room to define their specific stance and to attack Biden — even as he leaves several Trump-era policies in place, including the controversial Title 42 policy. Biden is also reportedly considering reviving a Trump-era policy that prevents migrants from applying for asylum in the US if they have not already done so in another country, like Mexico.

Democrats may not back the legislation either

GOP hesitation might be equal to skepticism on the Democratic side.

Sen. Dick Durbin (D-IL) and other Senate Democrats have been pushing in the lame-duck session to pass protections for Dreamers, seeing it as their last chance before the House goes under GOP control in January. But they weren’t talking about pairing that with the kind of border security provisions in the Sinema-Tillis framework.

Durbin hasn’t signed on to their proposal, but he’s leaving the door open for now: “As the author of the original Dream Act more than 20 years ago, I applaud every good faith effort to give these deserving individuals a path to citizenship. I’ve been in touch with my colleagues and will carefully review their proposal. I am determined to do everything in my power to help deliver a Christmas Miracle for Dreamers,” he said in a statement Monday.

The Congressional Hispanic Caucus — which has been calling on Congress to pass protections for Dreamers before the year’s end — has also yet to stake its position on the framework. Sebastian Roa, a CHC spokesperson, told Vox that the group hasn’t reviewed the legislative text but wants to see lawmakers “continue talking and figure it out for the sake of our Dreamers and the repercussions of DACA ending on our communities.”

Sinema and Tillis are still drafting that text, and for Democrats considering the bill, the devil may be in the details.

A Senate Democratic aide told Vox that their office is concerned about the provisions on asylum processing and the continuation of Title 42, which they see as a “sticking point.”

If the asylum processing provision is similar to one included in a separate bipartisan proposal that Sinema co-wrote in 2021, that would likely alienate some Democrats. Immigrant advocates warned that trying to speed up asylum processing to a 72-hour turnaround timeframe would infringe on the due process rights of asylum seekers, forcing snap decisions with potential life-or-death consequences.

Title 42 has also proved a dividing line in the Democratic Party. It was put in place under the Trump administration using dubious public health rationale and has become an overt, de facto national immigration and border security strategy due to its effectiveness at keeping migrants out of the US. A federal court has struck down the policy, leading to its scheduled rollback later this month.

Moderate Democrats and those facing tough contests in 2022, including incoming Pennsylvania Sen. John Fetterman, have questioned the Biden administration’s decision to end Title 42 earlier this year. Five Democratic senators — Sinema and Mark Kelly of Arizona, Joe Manchin of West Virginia, Raphael Warnock of Georgia, and Maggie Hassan of New Hampshire — even joined Republicans in introducing a bill that would have preserved the policy until 60 days after the surgeon general announces the end of the public health emergency related to Covid-19.

Progressives, on the other hand, have been calling on Biden to end Title 42 since shortly after he took office. As early as February 2021, 60 Democratic members of Congress wrote to the administration demanding that it “safely and effectively end all expulsions under title 42 … as soon as practicable and ensure that migrants can access our nation’s asylum system.”

Those provisions alone could make it hard to get the Democratic caucus on board. If so, that would mean the Sinema and Tillis bill won’t have a fighting chance.