In Washington, supporters of the right to abortion give an appointment to the midterm elections 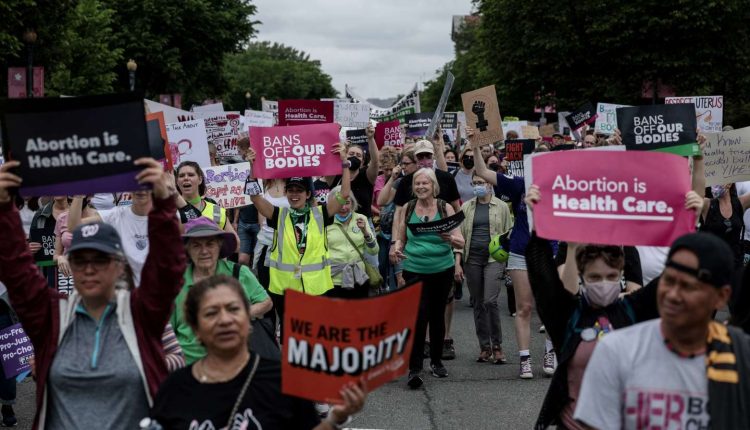 After the astonishment, the reaction. In Washington, as in other American cities, thousands of people gathered on Saturday, May 14, to protest against the probable decision of the Supreme Court in favor of the abolition of abortion as a federal right for all women. The revelation in the press, two weeks ago, of a working document to this effect, validated by five conservative judges – out of the nine who make up the Court – aroused a mixture of despair, anger and a feeling of emergency in the Democratic ranks and the so-called “pro-choice” camp.

Read also: Article reserved for our subscribers United States: a draft decision of the Supreme Court which would remove the right to abortion has leaked

In the heart of the capital, the rallying point was the obelisk of the Washington Monument. At the podium have succeeded many activists for the rights of women and minorities, representatives of health personnel. Rachel O’Leary Carmona, executive director of the Women’s March organization, called the rally a “first day of a summer of anger where we will be ungovernable”. The activist recalled with bitterness those years when women warned about the degradation of reproductive rights. “What did we hear in response? That we were too theatrical, too emotional, that we overreacted! »

If, by early July, the Supreme Court confirms the end of the era Roe v. wade – its judgment of 1973 making abortion a constitutional right – it will thus offer the possibility to each State to decide as it sees fit the complete ban or the drastic restriction of abortion. The most reactionary states could even remove all exceptions for incest and rape. The criminalization of the procedure could have serious consequences in terms of the right to private life, the intimacy of correspondence, but also contraception or in vitro fertilization. Fierce legal battles lie ahead.

Read also: Right to abortion: these States likely to ban abortion if the Supreme Court of the United States were to abolish this right

Rachel Carmona rejected the idea of ​​a “rewind” and called the crowd to general mobilization. Some demonstrators brandished drawings of metal hangers, a symbol of the dark times of clandestine abortions. “It is not because we had an epidemic that we must return to the Middle Ages”, read on a placard. For her part, Christa Vonderburg, 28, wore a message on her cheeks “My body, my choice. » With a friend, the young woman traveled to Washington from Atlanta (Georgia). But she’s from Seattle, on the other side of the country. “ I grew up in a religious home without understanding these issues of freedom, and taking it for granted that I was privileged. This current throwback to the early 1970s is ridiculous. This is not about God, about the Republican Party but about gross manipulation. My body is not a platform for a political program, my health is a matter between my doctor and me. »

You have 61.74% of this article left to read. The following is for subscribers only.