In Nicaragua, the local Catholic Church accused of “incitement to hatred” by the police 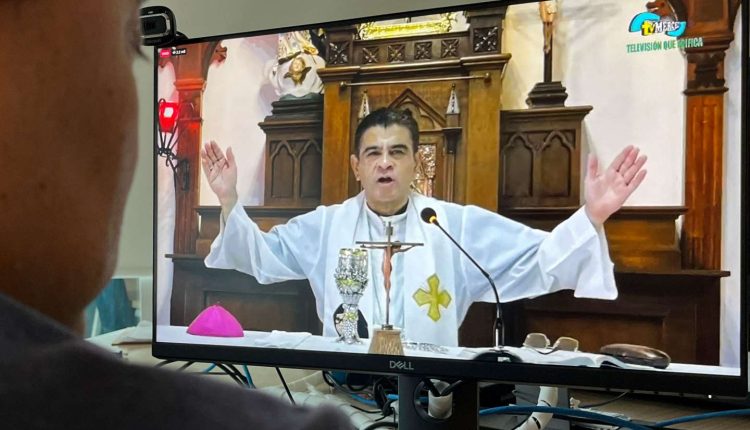 Relations between the power of Nicaragua and the local Catholic Church are souring. Nicaraguan police announced on Friday, August 5, that they had opened an investigation for “criminal acts”, and denounced “the situation created (…) under the auspices of the Bishop of Matagalpa”besieged since Thursday in his bishopric by the police.

In an official statement, the police authorities accuse the “high authorities of the Catholic Church of the Diocese of Matagalpa”, led by Bishop Mgr Rolando Jose Alvarez Lagos, of “attempt to organize violent groups, inciting them to commit acts of hatred against the population”.

The “actions” of the Church have “intended to destabilize the State of Nicaragua and to attack the constitutional authorities”assures the press release of the police which announces to have “opened an investigation to determine the criminal responsibility of those involved in these criminal acts”.

“His cassock does not grant him impunity”

Mgr Rolando Alvarez, critic of the government of President Daniel Ortega, celebrated a mass on Friday broadcast from his bishopric on social networks live from his bishopric of Matagalpa, 130 km northeast of the capital Managua. Riot police “continue to close the street” of the bishopric, he denounced during this service. “The main door and the garage are also blocked” by the police, said the 55-year-old prelate, who has been prevented since Thursday from reaching his cathedral, four streets away. “We are in the bishopric. No one can leave or enter”described to Agence France-Presse (AFP) one of the priests entrenched with Mr. Alvarez.

“Those under investigation will stay at home”, further specifies the police, which since Thursday has prevented the bishop and the priests who accompany him from leaving the episcopal seat. Mgr Alvarez had demanded Thursday respect for the ” freedom “ religious after the closure by the authorities of several Catholic radio stations and denounced a ” harassment “ policeman.

Read also: Article reserved for our subscribers In Nicaragua, the power targets the Catholic Church

Deputy Wilfredo Navarro, of the Sandinista party of Daniel Ortega, denounced on Friday “a provocative attitude” of the Bishop of Matagalpa. Rolando Alvarez “incites violence (…) He has already done so in 2018. Remember that he led, with other priests, the coup attempt [contre Daniel Ortega] which has caused so much suffering and tears in Nicaragua”said the deputy in an article published on the website of the public television channel Canal 4. “His cassock does not grant him impunity”Mr. Navarro warned.

“We support the religious who, like Rolando Alvarez, resist with dignity, coherence and courage the persecutions of the government of Ortega”said the Nicaraguan Center for Human Rights (Cenidh) on Twitter.

The European Union (EU) on Thursday condemned the closure ” arbitrary “ this week from several Nicaraguan Catholic radio stations as well as the use ” unprecedented “ violence since 2018 to intimidate government opponents.

Relations between the Catholic Church and Mr. Ortega’s government have been strained since 2018 when protesters demanding the resignation of the Nicaraguan president took refuge in churches. President Ortega has accused the Catholic Church of being complicit in a coup attempt hatched by Washington. The crisis even led to the expulsion in March of the Apostolic Nuncio (Vatican ambassador) Mgr Waldemar Sommertag.

Read also: Article reserved for our subscribers In Nicaragua, the opponent Cristiana Chamorro sentenced by the Ortega regime

Daniel Ortega, a 76-year-old ex-Sandinista guerrilla, was re-elected in November 2021 for a fourth consecutive presidential term, in a ballot from which all his potential opponents were absent, these having been arrested or forced into exile.

Protests calling for his resignation in 2018 were bloodily suppressed, with the death toll at least 355, hundreds imprisoned and tens of thousands exiled, according to the Inter-American Commission on Human Rights (IACHR). .

Read also: Nicaragua leaves the Organization of American States and closes its offices in Managua

American primaries: in Wyoming, Liz Cheney “does not represent who we…

Peru: two soldiers killed and the leader of the Shining Path seriously injured in…