In Chile, the crazy growth of the salmon industry, targeted for its consequences on the environment 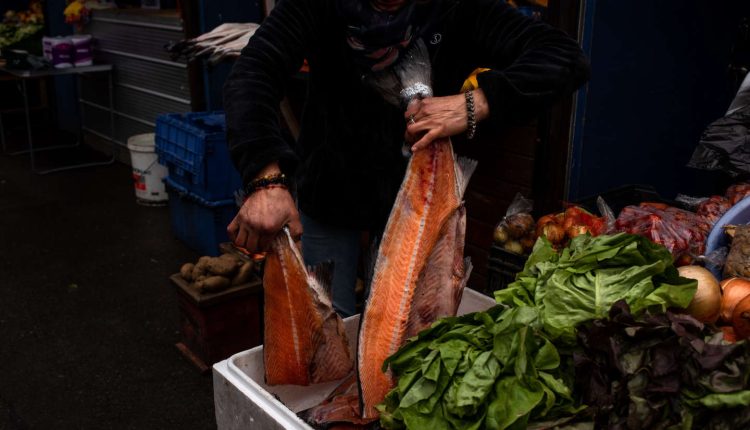 On the gray ocean, smooth as a sheet, fourteen green enclosures: submerged cages where the salmon are fattened. Again, after an arm of the sea, on water turned blue, this time by a Patagonian sky with capricious reversals: ten, then twelve enclosures, further offshore. Along the same coast, still, a factory manufacturing fish food from which emanates an acrid smell. In the region of Los Lagos (The Lakes, 1,000 kilometers south of Santiago), the farmed salmon industry is omnipresent: the gateway to Chilean Patagonia is its historic heart and, in search of to establish its growth, it continued to spread to the far south, in the region of Magallanes.

Read also: In Chile, the world’s second largest salmon producer, the “pink gold” is drying up

Colossal, the sector accounts for almost half of the country’s food exports, according to a report by the Consejo del salmon (Salmon Council, one of the employers’ organizations for salmon). It is even the second export product, after copper, the locomotive of a Chilean economy that is currently losing momentum (growth is expected at 1.8% this year then 0% in 2023, against a background inflation). The market is booming: overseas sales of salmon and trout jumped 33% between 2012 and 2021, representing nearly 650,000 tonnes and more than $5 billion in 2021, according to Salmon Chile (Saumon Chile, l other employers’ organization in the sector, bringing together 60% of production).

With a million tons “harvested” in 2021, according to the term devoted to aquaculture, Chile stands out as the second largest producer in the world, behind Norway. Its main recipient: by far the United States, before Japan and Brazil.

Fjords, maritime channels, estuaries protecting the breeding enclosures from devastating waves. But also a pure and cold sea, with a supply of fresh water: the Chilean south offers all the ingredients for the development of salmon which, although it is easily associated with the country, is an exotic species. “It was Japan that sought to launch this activity in Chile, at the end of the 1970s, to meet the demand of its population. It was originally a sector of small and medium-sized, artisanal, family businesses, far from the oligopolies with largely foreign capital, particularly Norwegian and Japanese, that we know today., recounts Jorge Katz, economist at the University of Chile. The idea then germinates to release the species to let it develop in a free state. The transplant did not take and the breeding model took hold in the 1980s and 1990s, a time devoid of environmental considerations.

You have 75.02% of this article left to read. The following is for subscribers only.