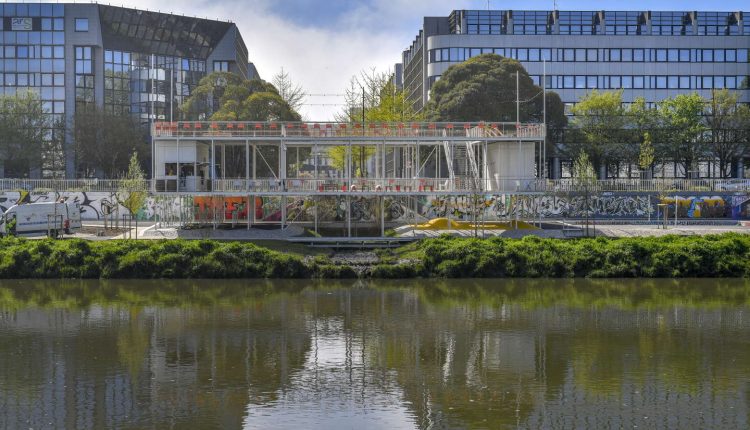 What is a vocation? At the time when he was “kid”Matthieu Colombel had “big problems falling asleep” and took advantage of “insomnia” to ogle the television programs his parents were watching. “I was lucky, they were fans of Hitchcock films and all the james bond. As I was only allowed to watch the beginning of the films, I swallowed an impressive amount of credits. And those, the Hitchcocks and the james bond, told a story on their own with incredible graphics, it literally bewitched me. »

Mr. Colombel has transformed this passion into a profession. After having cut his teeth in a renowned communication agency, the 39-year-old man co-founded the company Blackmeal, a key figure in motion design (understand: animated graphic creation), based in Nantes. Created in 2011, the company, with offices in Paris, has thirteen employees and a turnover of one million euros. In addition to projects for cinema and television, Blackmeal signs 250 educational videos every year for clients as varied as the NGO Doctors Without Borders, the Hospital Foundation or the company Rebond, manufacturer of eco-responsible and recyclable balloons.

Read also: In Montreal, the marriage of artificial intelligence and the hospital

The company intends to broaden its horizons and is preparing to open a studio in Montreal, Canada. “The first installation project dates from 2019states Mr. Colombel. We had won contracts with the video game company Ubisoft. Other clients were willing to work with us. We took offices in March 2020 but a week later, the Covid crisis brought everything to a halt. »

At the beginning of autumn, Mr. Colombel is preparing to cross the Atlantic again to secure the landing of his company on the banks of the St. Lawrence River. The Canadian branch of Blackmeal is due to open in 2023. “The studio will be made up of five to six people to starthe said. The goal is to bring together creative people from Montreal and Nantes. We have employees who are up for a mission of a year or two in Canada. Conversely, in the short term, we want Montrealers to take the opposite trip…”

Promise of an El Dorado

Backed by around ten stays, the entrepreneur, a member of the Nantes-Atlantique Center for Young Leaders, also intends to develop a training component in North America and wants to believe in the promise of a ” Eldorado “ : “Montreal has huge needs in the area of ​​graphic design and communication. We have already created very strong links. And in the same way that there is a Nantes-style game, one could say that there is also a Montreal-style game. Everyone there gives you a chance to work. We have a common DNA based on networking and benevolence. »

Read also: Article reserved for our subscribers Within the new generation of designers, consciousness reigns

The choice of the Montreal destination owes nothing to chance. For ten years now, Nantes has been working to forge connections with the metropolis of Quebec. “It may seem like an unexpected marriage because Montreal, by its size, plays in a higher divisionsmiles Raphaël Suire, professor at the IAE, school of economics and management of the University of Nantes. Delegations, mixing players from the academic world, figures from the cultural sector and start-up managers, carried out scouting in 2006. The key to entry was the cultural and creative industries segment. » “Montreal is the big sister of Nantes”advances Francky Trichet, elected Nantes delegate for innovation and digital, who has contributed to building bridges between two major events focused on digital, the MTL Connecte and Nantes Digital Week.

Bringing together 1,750 students, the Nantes Atlantique School of Design, labeled private higher education institution of general interest, has also invested in Canada. Its leaders have created a branch in the premises of Centech, a powerful incubator for French-speaking start-ups founded by the Ecole de technologie supérieure in Montreal, which aims to propel high-potential technological innovation projects.

Every year, since 2018, students from Nantes, with a bachelor’s degree in hand, migrate to Canada to obtain a master’s degree with a “coloration” original. “The experience we offer is similar to work-study trainingexplains Stéphane Gouret, Deputy Director General of the Nantes design school. One week, the students follow their courses in the premises of Centech, another, their mission is to challenge a start-up housed within this accelerator. »

Read also: Article reserved for our subscribers “Canada’s multiculturalism is causing a clash of the values ​​of the Quebec nation”

The success of the formula “exceeded expectations”according to Mr. Gouret, both project leaders “understood very quickly that design should not intervene as a ‘cosmetic effect’ but should be integrated as early as possible in the product development process”.

In addition to specific work on “corporate branding” in the development phase, the design has “completely reshuffled the cards” of several projects, supports Julie Le Ster, educational manager of Studio Montreal, the baptismal name of the Canadian branch of the school of design. On the advice of students, a medical society thus “evolves its technology” to design protective clothing adapted to the prevention of hip fractures.

In this start of the 2022 academic year, around fifty students from Nantes are phosphorescent with the hundred or so companies hatched within Centech. A promotion of sixteen bachelors is starting a new partnership with Zú, a start-up incubator led by Guy Laliberté, one of the founders of Cirque du Soleil, centered on the entertainment and entertainment economy. “The two poles are complementaryemphasizes Mr. Gouret. With Zú, we also place scenographers, graphic designers, motion designers…”

Many students choose to extend their immersion in Montreal, like Romane Caudullo, who arrived in 2019 with a bachelor’s degree in industrial design. The 24-year-old woman lent a hand, during her schooling, to a medical biotechnology company working to develop a new model of heart pump, via non-invasive technology. In particular, it has slipped its paw into the design and ergonomics of a medical control monitor. Strong of this ” rewarding experience “, at the end of her course, she landed a job with Bauer Hockey, a company specializing in the design of sports equipment for individuals and National Hockey League players. A godsend for the person concerned, who “Aspired to work in the world of sport from the start of school”.

Hired by a Web design agency, Paul Poirier, 25, and Théotim Auger, 23, are about to make another dream come true. At the beginning of 2023, they should join Centech as young creators of start-ups, with a view to developing an infallible digital solution in the field of cybersecurity, banishing the slightest password. “It’s a pretty loop that’s come full circlenotes the duo. Developing our project within the incubator that trained us, we couldn’t have dreamed of better. Especially since our circle of friends is here today. »

The two friends, who believe that“a touch of Nantes” is infusing in the city, savor “Montréal’s optimism” and note: “Here, people are not afraid to do what they want and to launch projects. There are fewer brakes than in France. »

Devoted this year to the theme “Eco(systems) of hope”, MTL Connecte, whose The world is a partner, offers dozens of debates from October 15 to 23, in Montreal and in streaming. The event, organized by the Digital Spring, aims to approach the digital field in a transversal way, through its economic, social, cultural and environmental impacts in various sectors of activity. Among the sub-themes, artificial intelligence and this question: “How do we guide this technology to become truly intelligent and enhance human capabilities? » Programming and registration below this link.