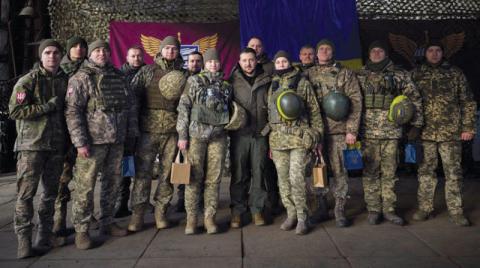 Ukrainian President Volodymyr Zelensky headed yesterday (Tuesday) to an area close to the battle front in Bakhmut, the main battlefield in the east of the country, where the Ukrainian army has been resisting a Russian attack for months.

Zelinsky was only 45 kilometers away from Bakhmut, which the Russian forces have been trying to control since the summer with the massive destruction that accompanied it, but they have been unable to do so until now.

Zelensky appeared in 3 video clips showing him in the Donbass region, which Moscow announced it annexed last September without fully controlling it. “Eastern Ukraine is the most difficult axis (on the front),” Zelensky said, addressing military personnel on the occasion of Armed Forces Day, adding: “Thank you for your steadfastness.”

After that, some of the soldiers were awarded medals. In another video clip in front of the entrance to the city of Sloviansk, the Ukrainian president saluted “all those who sacrificed their lives for Ukraine.”

In a related context, US Secretary of State Anthony Blinken said that Russia may be looking for a truce in Ukraine without negotiating a permanent peace agreement, considering that the war will end through diplomacy and negotiation. Blinken said the conflict in Ukraine would “almost certainly” end through diplomacy and negotiations, adding that a “just and lasting peace” was needed. However, the Kremlin presented a different vision on ending the war. Russian presidential spokesman Dmitry Peskov said that Moscow “agrees with the need for the outcome to be a just and lasting peace, and as for opportunities to enter into negotiations of any kind, we do not see any of them at the present time.”

He added that Russia would have to achieve the goals of its “special military operation” in Ukraine first before holding talks with any potential partners.
… More