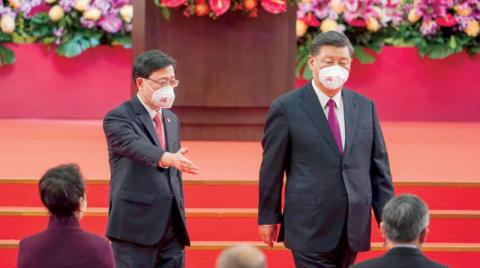 Chinese President Xi Jinping has praised “real democracy” and autonomy based on “one country, two systems” that has been implemented in Hong Kong since its return to Chinese sovereignty, ignoring international criticism of the applied national security law and the suppression of democratic freedoms.

On the 25th anniversary of China’s restoration of Hong Kong, which fell yesterday (Friday), Xi said during a celebration of the occasion in the former British colony: “After its reunification with the motherland, the people of Hong Kong became masters of their city,” considering that “real democracy in Hong Kong.” It started then,” despite the laws that were imposed on it and the suppression of democratic freedoms in it two years ago. After the city’s new leader, John Lee, was sworn in yesterday, Xi said there was no reason to change the “one country, two systems” formula used to govern Hong Kong. China and Hong Kong rejected the accusations against the national security law, saying the changes had “restored order rather than chaos” so the city could thrive. Xi said the law benefits the “democratic rights” of the city’s residents, and the “one country, two systems” formula will remain in effect. Washington, through its foreign minister, Anthony Blinken, lamented the “erosion of autonomy” in the global financial centre, while British Prime Minister Boris Johnson vowed not to “abandon” the city.

Tens of thousands of protesters marched during Xi’s visit to Hong Kong in 2017. On July 1, he used an annual opportunity for Hong Kong people to voice their grievances. No protests took place this time, with the most prominent opposition politicians and pro-democracy activists either in prison or in self-exile.
… More

Liz Truss is ready to flex the muscles…