Will the Saudi League regain its scoring average in the new season?! 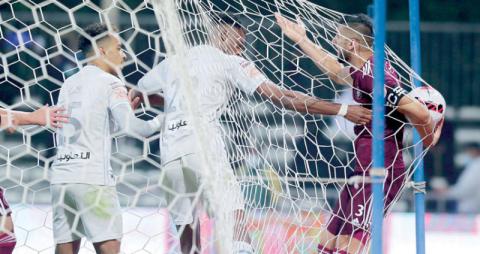 Will the Saudi League regain its scoring average in the new season?!

The scoring number for the last edition of the Saudi League decreased by 109 goals from the 2021 edition (Photo: Ali Al Dhaheri)

Is there an ideal rate of scoring in matches?… A question that you may find the answer to is often an estimation, but for sure goals are the most beautiful thing that matches offer to fans and match-watchers all over the world, and even commentators get a bit bored when the match is quiet without goals or even competition raging;
Certainly, the difference in the approach between the old and modern football, in turn, contributed to the decrease in the scoring rate in general, and the attention paid to the defensive aspects more than before, in addition to the suffering of some clubs from the absence of the leading striker.
In the English Premier League, for example, the scoring average in recent years ranged between 2.65 and 2.80, but it reached the record and best for the 2018/19 season, with an average of 2.82 goals per game.
In the Saudi Professional League, and since the number of clubs increased to 16 instead of 14 teams in the 2018/19 season, the scoring rate jumped to more than 160 goals in that season than the previous season, with 706 goals compared to 542 goals in the 2017/2018 season.
The number of goals continued to rise during the seasons that followed, and the goal number reached its peak in the 2020/21 season, reaching 746 goals, an average of 3.11 goals per game, according to the official Saudi Professional League statistics, which is a very large number even at the international level.
But last season, the scoring rate fell significantly to 637 goals, a difference of 109 goals from the previous season, and with it the scoring rate per match decreased to 2.65 goals.
Although the scoring number for the defending champion last season, Al Hilal, increased by three goals from last season, in which he scored 60 goals, compared to 63 goals in the last season, but the large number of teams competing for relegation contributed to the drop in the scoring rate significantly last season.
In an incident that was not repeated, the competition to escape the specter of relegation was linked even to the penultimate round with the teams from the sixth place to the penultimate place, after it was confirmed that Al-Hazm team had relegated several early rounds in light of the widening of the large point difference between it and its closest competitors.
The scoring rate of the teams competing for relegation declined very significantly, as Al-Hazm scored only 23 goals, which is the second lowest scoring rate last season, as Al-Fayhaa team, which finished its season in tenth place, scored only 21 goals.
In the 2020/21 season, the scoring number for each team was not less than 30, as the team that scored the least was Al Ain with 34 goals, while the rest of the teams scored more than forty goals.
Promises of a decrease in the scoring number for the last season due to the decline in the offensive performance of the teams and the presence of a large number of them in the competition to ensure survival until the last rounds of the competition.
Al-Fayhaa scored the same as the least offensive team, then Al-Hazm, and after them, Abha scored the third worst goal with 27 goals, although Abha finished its season in ninth place, and Al-Batin came after it with 31 goals, as Al-Batin was a candidate for relegation until the last round, which ensured survival He came in thirteenth place.
Al-Taei came in fifth place in the list of the lowest scoring teams last season with 33 goals, despite being ranked sixth in the league standings, followed by Al-Raed, whose strikers scored 35 goals.
Damak and Al-Ahly teams tied for the number of goals scored last season, with 38 goals for each team.
Apart from the goalscoring rate of the matches, Al Hilal succeeded in recording the highest scoring rate in one season in the 2019/2020 season, after scoring 74 goals in one season, a number that was not achieved previously, as the highest number did not exceed the sixties barrier.
After the number recorded by Al Hilal, what Al Nasr achieved in the 2018/2019 season, as it scored 69 goals, which is the second highest number in the history of the competition, while Al Shabab reached the number 68 in the 2020/21 season, which is higher than the balance of Al Hilal crowned with the championship title at the time, as the blue team scored Only 60 goals.
Reducing the relegation cards to only two cards exceptionally for the new season, which will witness at the end of it a new increase in the number of teams to 18 teams compared to 16, with the rise of four first-class teams and the relegation of only two teams, in an increase in the number of goals and a rise in the final score at the end of the season.