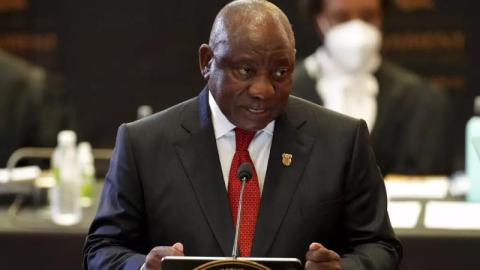 Close associates confirmed that Ramaphosa “has no intention of resigning.”

A report issued by a committee of legal experts accuses South African President Cyril Ramaphosa of being involved in the case known in the media as the “Farmgate” scandal. “He does not intend to resign.”

The legal committee, headed by a former chief justice, accused Ramaphosa of “covering up the theft of $4 million in cash from his farm in 2020,” describing the South African president’s answers as “illogical.”

The report of the Parliamentary Legal Committee included evidence described as “compelling” on the “Vala Vala” livestock farm, owned by Ramaphosa. The report said, according to Agence France-Presse, that Ramaphosa “may have committed violations and errors related to a robbery that took place in 2020 on the farm,” noting that “there were funds worth $ 580,000 hidden under sofa cushions in a room that is not used much.”

Ramaphosa had previously denied the charges against him, and said in a report submitted to the parliamentary committee, that “the money stolen from his farm is from the proceeds of buffalo,” referring to “the sale of a group of buffaloes in 2019 to a Sudanese citizen for $580,000.” But the invoice he submitted “does not contain” details of the buyer’s identity, according to the parliamentary committee report.

In turn, Maguiña stressed that “it may be in the interest and long-term sustainability of constitutional democracy, after Ramaphosa’s presidency, to challenge such a clearly flawed report, especially when used as a criterion for impeachment of the current head of state,” according to Agence France-Presse.

The case dates back to the beginning of last June, when a case of robbery on the Ramaphosa farm dating back to February 2020 was revealed, and according to a complaint filed by the former head of South African intelligence, Arthur Fraser, “the thieves entered the private property of the president; Where they found 4 million dollars in cash.

The complaint accuses Ramaphosa of “hiding the robbery from the police and taxes, and then buying the thieves’ silence.” And while “Ramaphosa admits that the theft took place,” he “talks about stealing a much smaller amount,” denying the accusations against him.

And last September, the South African parliament announced, “the formation of an independent commission to investigate the charges against President Ramaphosa, and to determine whether there is sufficient evidence to initiate impeachment proceedings against him.” Removing the president requires a two-thirds vote of parliament on the decision. The ruling party led by Ramaphosa has more than two-thirds of the seats.

Following the issuance of the parliamentary committee’s report, calls for Ramaphosa’s resignation increased, according to Agence France-Presse. Observers considered the release of the report at this time to be “critical.” The ruling party is preparing to decide whether Ramaphosa will run on behalf of the party for a second term in the presidential elections scheduled for 2024.

It is scheduled to meet members of the African National Congress on Monday morning, to discuss the future of Ramaphosa, according to assurances to the French Press Agency.