Where has Agatha Christie gone? 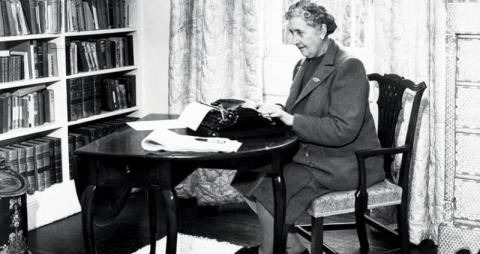 The British novelist Agatha Christie’s sales figures are still exceptional by all standards, not only because they reached record limits in totaling more than two billion copies, but because they have continued for a long time, more than a hundred years since the publication of her first work (“The Mysterious Events at Styles”, written in 1916). and published in 1920). The famous British publishing house “Penguin” printed one million copies within one day of 10 of her novels, on the anniversary of the quarter century since the publication of her first novel. In 1961, UNESCO declared her “the best-selling author in the world”, after recording the translation of her works into 103 living languages ​​(compared to the Bible, which was transmitted into 171 languages, and Shakespeare into 90 languages).

However, this author, who became the crowning queen of crime literature and detective adventures in the Anglo-Saxon space, and an essential part of the soft power of British culture, suffered greatly from the negative reputation she had acquired sometime during 1926 when she disappeared for eleven days, and many thought her fate was death; At least according to the headlines of the newspapers of those days, which offered material rewards for those who find them. The police had found the glamorous novelist’s car abandoned in Surrey, south of London, and launched an extensive operation to search for her in the green areas, anticipating the worst. But the press soon turned on her and stole her with mourning tongues, after she was discovered registered under an assumed name in the luxurious Harrogate Hydro Hotel; She spent her days shopping for new clothes, and evenings dancing and gossiping with strangers about her grief over the death of her young daughter. A member of the Labor Party raised questions in the House of Commons about the cost incurred by the kingdom, whose economy did not recover from the effects of the First World War, to search for that wealthy, evil lady, while the American newspaper “Washington Post” called for this cost to be charged to the account of Christie’s literary agent, saying that “His heartless client colluded with the public, and manipulated his emotions for the sake of more fame.”

And of course; Journalists, curiosities, and film directors have researched the mystery of Christie’s disappearance, and over the past decades many varying explanations have been put forward, united by a tendency to condemn her in one way or another, from accusing her of plotting to kill her husband’s mistress (the first was Archibald Christie and an officer in the Royal Air Force) or trying to intimidate him into returning to her, To carrying out a satirical plot to increase the sales of her latest novels, to a harsh class criticism of a wealthy, corrupt lady, she must have believed she was above the normal rules of conduct for common citizens.

Today, nearly a hundred years after the disappearance, Lucille Worsley, in her newly published Hodder and Stoughton biography of Christie, calls on us to give the famous novelist a measure of justice, and to accept her behavior during her disappearance as the closest thing possible to a desperate and confused reaction in the context of a crisis Mental health the novelist was going through at the time. The news of her loss of her close mother was accompanied by an announcement by her husband that he would leave her for a younger woman. Indeed, Christie felt lost at the time, and wanted, according to her statements, “to end her life,” and she headed to Yorkshire in a state of wandering in search of relief from a short, intense and painful period that made her lose her mental balance, which prompted her to flee from her reality to a very far point from the atmosphere The usual home.

For the rest of her long life, Christie appears to have been so disoriented by the disappearance scandal that she had always considered the very immoral idea of ​​seeking public attention for personal gain.

And Worsley conveys in the book, about her grandson, that everyone in the family avoided bringing up the topic for discussion in front of her so that she would not regain her sense of shame. Christie was probably wronged and accused by many of duplicity and lying, and it took a hundred years for our view of mental health issues to develop; For a new biographer to come to place the disappearance in a different context, far removed from bad intentions and harsh prejudices.

However, this huge hype that still reverberates even a hundred years later is an indication of how popular and important Christie is; Only five years after her debut as a novelist, she dedicated herself to crime fiction. In fact, from the beginning of her work, she quickly created a special atmosphere that people loved: a country house for a wealthy class suffering from disintegration and social pressure, a crime suspected of being committed by a number of personalities who all have reason to hate the victim, and a private investigator named Poirot (charted as a Belgian refugee displaced to The United Kingdom because of the war) gathers those concerned in the drawing room to reveal the criminal on the last page. It seems that Christie’s experience of volunteering for field service in the pharmacy of a makeshift military hospital during the First World War was behind her choosing the poison “cyanide” as a preferred killing tool; No less than 18 of her novel characters spent a dose of it in the space of 10 novels and 4 short stories.

Agatha Frederick Miller was born in 1890 to an aristocratic American father in Devonshire (Northwest of London).

Worsley says that the early death of Christie’s father at the age of 11 left on the edge of her mood a constant feeling of physical and emotional insecurity, which subsequently became a hallmark of the way she weaves the literary landscape. This coincided with a period in Britain during and after World War I, in which family relations were disrupted and patriarchal structures were damaged, including the local forces’ grip on law enforcement and order, which may explain the wide and rapid acceptance of Christie’s early detective novels among the British audience of readers.

Worsley Christie is a pioneer of modernity who reformulated many of the classic Victorian novel’s concerns about inheritance, madness, and turbulent sexual relations, providing character models that broke with traditional stereotypes of both men and women.

Her works, which are almost uncountable, include achievements of various literary genres: novels, short stories, theatrical texts, in addition to her personal memoirs, and most of them are still in circulation in popular, regular and luxurious editions that are reissued from time to time, especially when new films and series are inspired by the release. Characters, and more.

Her writings were not limited to crime literature exclusively, but she also wrote spy novels, and attached the detective “Poirot” after 1966 with another character that proved popular, the detective “Madame Marple”, who became for many – through Margaret Rutherford, the veteran British actress who played the role of “Miss Marple in the sixties – the same Sun Christie, although she was not at all similar in terms of appearance.

Christie’s earned millions of pounds from her books and play rights, but was always close to bankruptcy due to her endless opulence and obsession with clothes and parties. She married for the second time to archaeologist Max Mallowan in 1930, despite the disapproval of everyone around her, who considered her marriage to him, who was younger than her, a “marriage of convenience”, seeking to obtain funding for his field trips to archaeological sites in the Middle East. But Worsley believes, however, that that relationship was more than just a source of funding for trips, and it endured through the days even when they diverge from time to time, but Mallowan was taking advantage of those periods of estrangement to weave relationships with lovers, one of whom married shortly after Christie’s death in 1976.

Much controversy has been raised about Christie, and her famous disappearance did not help give her what she deserves on a personal level of understanding, appreciation and love, and therefore Worsley’s biography seems a kind of correction, albeit belated, to the balance of justice. But Agatha Christie’s literary genius is never in dispute, and he doesn’t think anyone will ever be able to dethrone her as the crowned queen of British culture’s crime literature.