Washington to challenge China in the Taiwan Strait 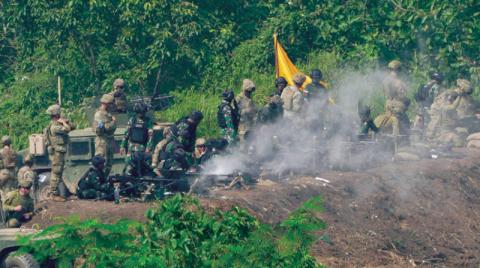 A senior US official announced yesterday (Friday) that the United States will conduct “sea and air transit operations” in the Taiwan Strait in the “coming weeks”, despite the escalation of tension between Washington and Beijing over the island, which China considers an integral part of its territory.

And Kurt Campbell, the senior adviser to the US president for Asian affairs, confirmed that despite the tension, US forces would continue to “fly, sail and conduct operations where international law permits, consistent with our long-standing commitment to freedom of navigation,” adding: “This includes conducting regular sea and air transit operations in Taiwan Strait in the coming weeks.

Reuters quoted Campbell as saying that China tried to use the visit of US House Speaker Nancy Pelosi to Taiwan last week to change the current situation in the Taiwan Strait, adding that it is blockading the island with 12 warships.

Campbell stressed that the US response to Chinese moves will be “patient and effective”, and that the US presence in the region will counter destabilizing Chinese behavior, adding that China has exaggerated its reaction and continues its provocations as part of what he described as an “intense pressure campaign against Taiwan.” This campaign is not over, Campbell said, and the United States expects it to continue in the coming weeks and months.

In addition, on Thursday, the Taiwanese army conducted new live-fire exercises after Beijing, which continues to threaten, ended its largest ever military maneuver around the island. And appeared in a live broadcast, artillery pieces lined up on the coast and soldiers distributed in units firing one shell after another towards the sea. The authorities downplayed the importance of these exercises, stressing that they were previously scheduled and do not constitute a response to China’s maneuvers.
… More