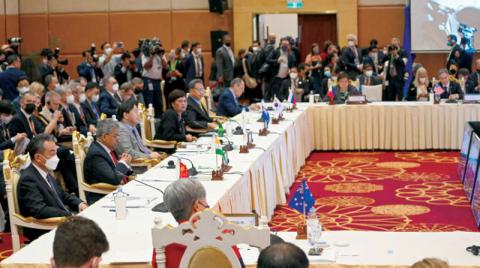 Yesterday (Friday), the United States condemned the “major” Chinese escalation over Taiwan, while Beijing announced a series of political and military measures in response to the visit of US House Speaker Nancy Pelosi to the island.

After talks with foreign ministers from Southeast Asian countries in Phnom Penh, US Secretary of State Anthony Blinken saw China’s military maneuvers in the vicinity of Taiwan as a “significant escalation.” “(Pelosi’s) visit was peaceful,” he said. There is no justification for this harsh, exaggerated and escalatory military response.”

For its part, the White House summoned China’s ambassador to Washington, Xi Gang, to protest China’s “irresponsible” behavior toward Taiwan, according to National Security Council Communications Coordinator John Kirby. “We deplore the irresponsible actions of China, which are in contravention of our goal of maintaining peace and stability in the Taiwan Strait,” Kirby said.

China is carrying out massive military maneuvers in the vicinity of Taiwan, which began on Thursday and will continue until Sunday. It launched ballistic missiles, and deployed fighter planes and warships around the island.

In addition to military maneuvers, Beijing suspended cooperation with the United States on several joint files, most notably the dialogue between senior military leaders, and canceled a planned bilateral meeting on a mechanism for military and maritime security. The Chinese Foreign Ministry also confirmed the suspension of cooperation with Washington on climate talks and efforts to prevent cross-border crime, drug smuggling, and the return of illegal immigrants.

Liz Truss is ready to flex the muscles…