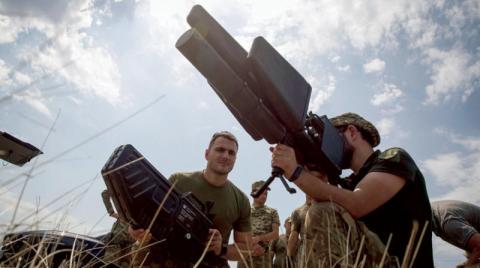 A grain ship off the Syrian coast… and another to Africa

The Ukrainian army seeks to besiege the Russian forces in Kherson, after bombing all the bridges of the occupied city in the south of the country. “The only way to cross the river for the occupiers is to use floating boards near the Antonevsky Bridge, but it will not fully meet their needs,” said local parliament member Sergey Khelan. He revealed that “Russia is moving the command centers from the right bank of the river to the left bank because it realizes that it may be unable to evacuate the site in the necessary time in the event of an escalation.”

This coincided with the exchange of accusations by Kyiv and Moscow again of the bombing of the Zaporizhia station in the south of the country, while Ukraine warned the Russians against their presence at the station. “Reduce your presence on the streets of Energodar,” the Ukrainian group “Energo-Atom”, which operates the Zaporizhia station, said. We have received information about new provocations by the Russian occupier.” The group thus conveyed the message of a local official in the city where the station is located, who remained loyal to Kiev. The group added: “According to the testimony of the residents, the bombing was renewed towards the Zaporizhia nuclear power plant,” noting that “the time interval between the launching of the strikes and their arrival is between three and five seconds.”

In a related context, sources in the shipping sector said that the first grain ship that left Ukraine, according to the “Istanbul Agreement”, approached yesterday, Sunday, the Syrian port of Tartus, after the original buyer in Lebanon canceled the shipment due to quality concerns.

A UN official also said that a wheat ship, chartered by the United Nations, will leave Ukraine for Africa in the coming days.
…More