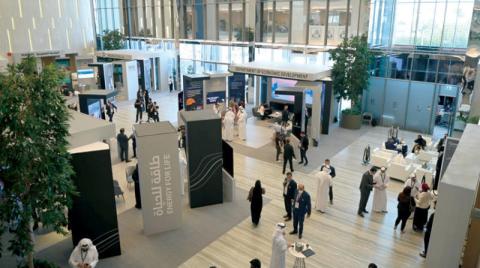 The Abu Dhabi Securities Exchange announced on Thursday the secondary listing of the bonds issued by the Abu Dhabi National Energy Company “TAQA” worth $8.25 billion in 9 tranches, indicating that their maturity date is between 2023 and 2051.
“TAQA” said that the issuance of these bonds, which are mainly listed on the London Stock Exchange, comes within the framework of the global medium-term bond program issued by “TAQA”, where the size of the issuance of these bonds ranges between $500 million to $1.25 billion, with issuance dates ranging from 7 years to 30 years.
The company pointed out that these bonds come with fixed interest rates ranging between 2 percent and 6.5 percent, and they will be distributed to investors twice a year. ». The listing of these bonds would raise the number of debt and financing instruments offered on the Abu Dhabi Securities Exchange to 37.
Forum {Made in UAE}
In addition, the UAE Ministry of Industry and Advanced Technology, in cooperation with the Department of Economic Development, said that the “Make in the UAE Forum” witnessed the signing of 32 agreements and memoranda of understanding between government agencies and industrial and financing companies, to diversify and sustain the industrial sector and enhance its contribution to the national economy.
The ministry stated that among the most prominent of these agreements, the Abu Dhabi National Oil Company “ADNOC” signed agreements worth 21 billion dirhams ($ 5.7 billion) with a number of local and international companies to provide a percentage of their needs that they plan to purchase from locally manufactured products and materials.
The “Made in the UAE” forum witnessed the major Emirati companies participating in announcing their commitment to saving 110 billion dirhams (29.9 billion dollars) through potential purchase agreements. , which will contribute an amount of 6 billion dirhams ($ 1.6 billion) annually to the country’s gross domestic product.
During the forum, facilities were announced for manufacturers from reducing industrial fees to companies, tariffs for services provided to the local industry sector, and facilitating the entry of Emirati products to new markets.