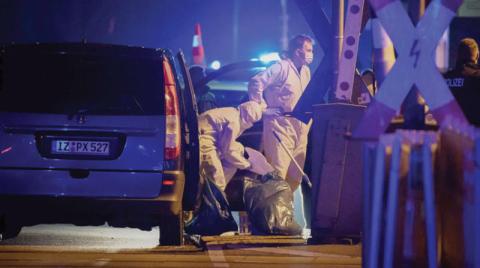 Two people were killed, and at least 5 others were injured, in a stabbing accident inside a train, between the cities of Kiel and Hamburg, in western Germany, yesterday.

The police arrested the perpetrator of the attack, and said that his motives were not yet clear, and transferred him to a hospital, where he was treated for the wounds he had inflicted on himself with a knife.

The police did not disclose the identity of the perpetrator or his nationality, but Bild newspaper said that it had obtained information at first that the man was Syrian, only to change the story later and say that he is a Palestinian from Gaza, and that his age ranges between 20 and 30 years.

Bild said the man had temporary residence papers, but the police could not read his date of birth because the papers “were covered in blood”.

Mystery remains about the motives for the attack. The German news agency quoted security sources as saying that the man was not known as an extremist to the police, and that he may be “mentally disturbed”.

A large number of police cars and ambulances were deployed around the station, according to photos published by Bild newspaper.

Similar incidents occur from time to time in Germany, some of which were returned by the investigators for reasons of mental disorder, and others in which the assailants were convicted of imprisonment due to extremism.

And last December, a Palestinian born in the Yarmouk camp in Syria was sentenced to 14 years in prison for stabbing four people on a Munich train in 2021. The judge rejected defense arguments that the man was mentally disturbed and that he thought someone was following him, and said that The accused, Abd al-Rahman, acted with “extremist motives” and that he “wanted to cause harm to non-Muslims.”

Ice in a different way in space

Libya: Saleh proposes to amend the Constitutional Declaration and consider it a basis…

A warning of the failure of the Sudanese “framework agreement”.

A woman was recovered alive after 52…

The rise of CPES, selective training…