Turkish-Russian consultations to avoid a ground operation in northern Syria 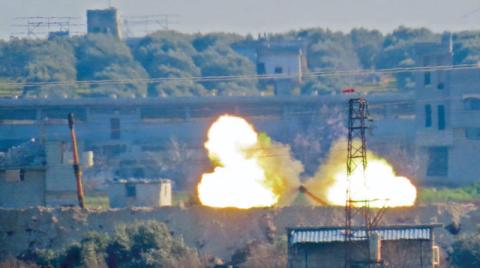 Turkish forces and factions of the Syrian National Army, loyal to Ankara, continued to escalate their attacks on areas controlled by the Syrian Democratic Forces (SDF) in north and northeastern Syria, in conjunction with talks being held by a Russian delegation in Istanbul, led by the situation in Syria and the Turkish threat to launch a ground military operation against the SDF. » In northern Syria, along with Moscow’s efforts to normalize relations between Ankara and Damascus.

According to Turkish media reports, Russian President Vladimir Putin’s special envoy to Syria, Alexander Lavrentiev, will join the Russian delegation, on Friday, on the second and final day of talks that focus mainly on the Syrian file in light of Turkey’s threat to launch a ground operation in northern Syria, and reports about a deadline Turkey gave it to the American and Russian sides; In order to remove the fighters of the “SDF” – whose strength is dominated by the Kurdish People’s Protection Units, which Turkey considers a terrorist organization and an extension of the PKK in Syria – from its borders to a distance of 30 kilometers.

There were reports that Russia was seeking to persuade the SDF to withdraw from the border areas with Turkey, and to replace them with regime forces, in order to spare the region a major escalation and a new Turkish military operation, a proposal rejected by the leader of the SDF, Mazloum Abdi.

Turkey accuses both Russia and the United States of not implementing their commitments under two memorandums of understanding in October 2019 for a cease-fire and an end to the “Peace Spring” military operation, which targeted the “SDF” sites in northeastern Syria, as it obtained from them pledges to expel the “SDF”. » for a distance of 30 kilometers deep into Syrian territory.

According to Turkish sources, the Turkish and Syrian delegations are also discussing the issue of normalization between Ankara and the Syrian regime, as Moscow seeks to hold a meeting between Turkish President Recep Tayyip Erdogan and the head of the Syrian regime, Bashar al-Assad, and restore relations to what they were in the past.

Ankara calls for the withdrawal of the “SDF” from the cities of Tal Rifaat, Ayn al-Arab (Kobani) and Manbij in northern Syria, and has set a deadline for fulfilling its conditions in order to freeze the ground military operation that was prepared for it to control those areas.

The withdrawal of the “SDF” from those areas, and the deployment of regime forces in their place, will result in an escalation of contacts between Ankara and Damascus, as Erdogan does not mind meeting Assad, while Damascus does not wish to achieve such a meeting before the presidential and parliamentary elections scheduled in Turkey in June. Next, so as not to give Erdogan a “free victory.”

Last week, Turkish presidential spokesman Ibrahim Kalin said that his country’s goal is to remove the Kurdish People’s Protection Units, the main component of the “SDF”, from the Syrian-Turkish border at a distance of 30 kilometers, stressing, at the same time, that the military operation may begin at any time, and that The decision will be taken after evaluations are made by the relevant references in Turkey

A statement issued by Kalin’s office, yesterday, Thursday, stated that these organizations were targeted by Turkish operations in Syria and Iraq within the framework of the right to self-defense in accordance with Article 51 of the United Nations Charter. It was confirmed that Turkey is determined to eliminate all kinds of terrorist threats.

The United States’ support for the “SDF” as a close ally in the war against the terrorist organization “ISIS” angers Turkey. Washington rejects any new Turkish military move in northern Syria.

In turn, a spokesman for the White House National Security Council, John Kirby, said, on Wednesday, that Washington does not want Turkey to continue its military attacks in northwestern Syria, although it recognizes Ankara’s right to defend itself, adding, “These attacks will expose civilians to greater danger than they are.” Indeed, it threatens our soldiers and personnel in Syria, as well as our mission in the fight against ISIS.

At the same time, Turkish forces bombed the vicinity of the villages of Al-Mayassa and Zer Nait in Sherawa district in Afrin countryside, north of Aleppo, causing material damage to the citizens’ property.

Turkish forces and their loyal Syrian National Army factions, stationed within the Peace Spring area, shelled, with heavy artillery, the villages of Al-Kouzeliya and Al-Tawila in the countryside of Tal Tamr, northwest of Al-Hasakah.