Three dead in the return of angry protests to southern Iraq 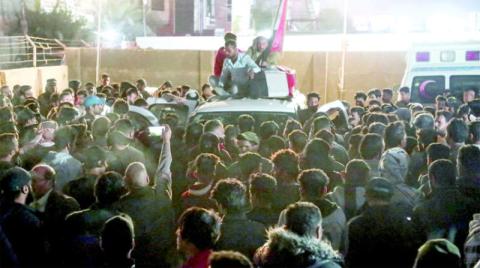 In the first protest confrontation in the era of Prime Minister Muhammad Shia al-Sudani since he assumed office at the end of last October, hundreds demonstrated in various cities in southern Iraq. The largest demonstrations were concentrated in the angry city of Nasiriyah, the center of Dhi Qar Governorate, demanding services, job opportunities, and compensation for those injured in previous demonstrations.

On Wednesday night, violent confrontations took place between the demonstrators and the security forces at the “intersection of the lobby” in the center of Nasiriyah, which led to the killing of 3 whose bodies were buried in the city late at night, in addition to the injury of at least 15 others. according to health sources. And the governor of Dhi Qar declared (yesterday, Thursday) an official holiday to mourn the victims. Similar events occurred. But without casualties, in the provinces of Basra and Babil.

The occurrence of a number of casualties and injuries among the demonstrators prompted Prime Minister Muhammad al-Sudani to discuss the rapid developments in an urgent meeting with the Ministerial Council for National Security, in which he discussed the events of the demonstrations and “decided to send a higher security committee to Dhi Qar Governorate to investigate the events that caused casualties and injuries.” between the ranks of the demonstrators and the security services »; According to a statement issued by the meeting.

The Council stressed “the need to preserve the lives of peaceful demonstrators, and to prevent any party from intervening by politicizing the demonstrations or exploiting them for personal purposes.”

The Minister of Interior, Abd al-Amir al-Shammari, directed the replacement of the Dhi Qar police chief, following the losses that occurred during the demonstrations.

And the “Security Media Cell” said in a statement: “In implementation of the directives of the Commander-in-Chief of the Armed Forces, the Minister of Interior, Abd al-Amir al-Shammari, directed the replacement of the police chief of Dhi Qar Governorate and the appointment of Brigadier General Makki Shna’a as his replacement.”

The substitute police chief, Brigadier General Shnaa, expressed his regret yesterday for the casualties in the demonstrations, and told the local “Radio Nasiriyah”: “Our efforts focus on protecting citizens; especially the protesters; They are our children and our brothers. We seek to open channels of dialogue with them, which already exist, and we hope to reach a formula for de-escalation with them.

Shnaa added, “We will cooperate with the investigation committee that arrived from Baghdad, and we will hold those responsible accountable.”

till then; A civil activist told Asharq Al-Awsat: “The demonstrations continued (yesterday, Thursday) in Nasiriyah and in Al-Haboubi Square, specifically the main center of (the October 2019 protests).”

He added, “The demonstrators categorically reject the excessive force used by the security forces against the demonstrators, and some of them cut the victory bridge and the intersection of the lobby in the center of Nasiriyah with burning tires, but there are serious efforts to calm things down inside the city.”

on her part; Yesterday, Thursday, the “Emtidad” movement, which has more than 10 parliamentary seats, and most of its deputies are from Dhi Qar Governorate, issued a strongly worded statement condemning what happened in Nasiriyah, in which it said: “In continuation of the bloody approach that the authority followed during the 2019 demonstrations; The scene is being repeated today by the same ruling parties, which, unfortunately, were applauded and blessed by the international community, which claims to be democratic. Today, live bullets are being fired at unarmed demonstrators in the city of Nasiriyah, which has not healed its wounds yet.

According to the statement; The Secretary-General of the “Emtidad” movement, Representative Dr. Alaa Al-Rikabi, accompanied by Representative Dr. Falah Al-Hilali, met with the Minister of Interior, Lieutenant General Abdul Amir Al-Shammari, and the Chairman of the Parliamentary Security and Defense Committee, Dr. Khaled Al-Obaidi, to discuss the events taking place in Nasiriyah, and the meeting concluded with a demand for “dismissal.” Dhi Qar police chief from his position », which happened later.

The statement stressed “the need to find solutions to the issue of the injured demonstrators in order to obtain their rights as soon as possible.”

Lebanon: Parliamentary movement to solve the presidential crisis…and the army…

McCarthy says he sees an…