The US Supreme Court is once again a partisan battleground 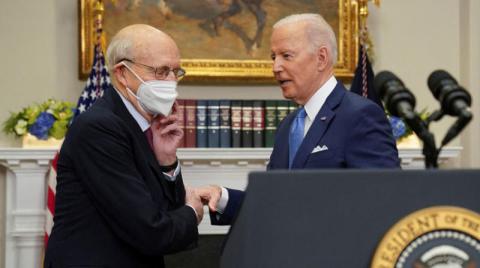 US President Joe Biden announced the retirement of Supreme Court Justice Stephen Breyer at the age of 83.

As Biden prepares to nominate a new judge to succeed the liberal judge appointed by former President Bill Clinton, he has pledged to keep his promises and appoint an African-American woman to a position that needs Senate confirmation. Biden confirmed that he will consult members of the Council before relying on a candidate, no later than the end of February (February).

For their part, Democrats in Congress have prepared for a fateful partisan battle in a heated election season.

Senate Majority Leader Chuck Schumer promised that “President Biden’s nominee will get a speedy hearing in the House Judiciary Committee and be approved very quickly.”

Although the Democrats will not need the Republicans to endorse Biden’s nominee, which requires a simple majority, the party’s deep divisions will make it difficult for the White House to find a candidate with the support of every facet of the party.

In the face of these divisions, Schumer began efforts to consolidate the Democratic ranks to fight the battle of approval, which if the Democrats lose, will mean a crushing loss for them in the legislative elections, and even the presidential elections.
… More