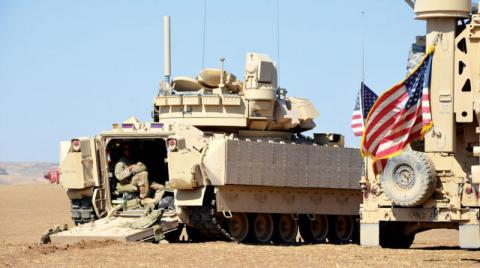 Yesterday, information reported that “intense movements” of pro-Iranian militias were monitored in the city of Al-Mayadin, which is described as the “capital of the Revolutionary Guards” in eastern Syria, after freezing their movements and concealing their mechanisms for about 10 days, for fear of renewed strikes by the “international coalition” on their sites and missile platforms aimed at Coalition bases in Deir ez-Zor.

The Syrian Observatory for Human Rights stated, in a report yesterday, that the Iranian militias had moved artillery and heavy machinery from the signal area in Al-Mayadin towards Deir Ezzor and Raqqa, but indicated that the military manifestations within the Iranian militia areas had returned to their condition before the strikes of the “international coalition” at the end of the day. Last August. The Observatory pointed out that its activists had monitored, on September 19, the removal of military manifestations in the city of Al-Mayadin, which is described as the “capital” of the Iranian militias in eastern Syria, for fear that the “international coalition” would target it.

The US-led coalition had previously launched severe strikes against the positions of the “Iranian militias” in Deir ez-Zor, after it was accused of launching attacks against the Al-Tanf base (for Syrian opponents and the coalition forces) at the Syrian-Jordanian-Iraqi border triangle, as well as on an American military base in Al-Omar field. Under the control of the “Syrian Democratic Forces” in the countryside of Deir ez-Zor.

Meanwhile, the “Observatory” reported that an explosive device exploded while a car was passing north of the town of Ghadir Al-Bustan on the main road in Mazraat Al-Mahoubi near the occupied Syrian Golan in the Quneitra countryside, which led to the injury of a woman, who was taken to hospital. On August 23, the “Observatory” had monitored the explosion of an explosive device in a military vehicle of the Russian forces, in the village of Al Muallaqa, near the Golan region, which damaged the car and injured those inside it.

In northern Syria, the “observatory” said that an artillery shell fired by the regime forces fell in the vicinity of a Turkish point in the village of al-Kafir in the western countryside of Idlib. He also indicated that the regime forces targeted a civilian car carrying a number of citizens in an agricultural land on the outskirts of Deir Sunbul, east of Jabal al-Zawiya in Idlib Governorate, which led to the injury of a child. This came hours after a member of the regime forces was killed by a sniper at the hands of the “Al-Fatah Al-Mubin” factions on the Kabanah Hills axis in Jabal Al-Akrad in the northern countryside of Lattakia.