The presidential vacancy prevents Lebanon from celebrating its independence 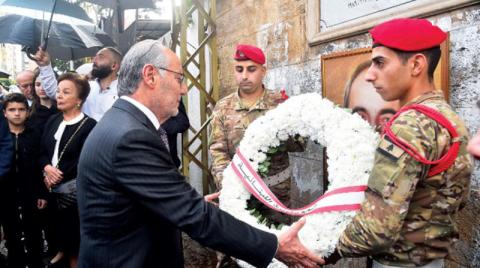 Yesterday, Tuesday, the commemoration of the 79th anniversary of Lebanon’s independence was limited to calls for electing a president and preserving sovereignty, without an official ceremony that Lebanon used to hold on this occasion, due to the vacancy in the presidency.

The Lebanese army did not organize a military parade on the occasion, in which military brigades representing combat brigades and regiments usually participated, along with battalions from the security forces and the Red Cross, in addition to receiving congratulations from the presidents at the presidential palace. Military sources said that the performances were not held this year, due to the presidential vacancy, since the president by law is the supreme commander of the armed forces, and therefore it is not possible to organize a ceremony, even if it was symbolic, because of this aspect only.

The Minister of Education, Abbas al-Halabi, laid a wreath at the site where President Rene Moawad was assassinated on November 22, 1989, and Moawad was the first president of the republic to be elected after the Taif Agreement was reached.

Also, in previous presidential vacancy periods, no military parades were held, while two symbolic parades were held in 2019 and 2020 at the Ministry of National Defense, with the participation of the President of the Republic, the Speaker of Parliament, the Prime Minister, ministers and other officials, in light of the protests in 2019, and the crisis of the spread of the Corona epidemic in 2019. 2020.

And 22 days have passed since the vacancy in the position of the presidency of the republic, since the end of the term of former Lebanese President Michel Aoun on October 31, and it is still not possible to reach a consensus between the political forces represented in the House of Representatives on one person who can secure the votes of two-thirds of Parliament for her in the session. the first, or securing a quorum of two-thirds of the members of the Council in the second session. It is expected that the fate of the session called for by Parliament Speaker Nabih Berri tomorrow, Thursday, will be similar to the fate of the previous six sessions.

Contacts between the political forces did not stop during the past days to reach an understanding. The Lebanese Forces, the Progressive Socialist Party, and other forces and independents adhere to the candidacy of Representative Michel Moawad for the presidency, while Hezbollah, the Amal Movement, and other forces are pushing for the nomination of the head of the Marada Movement, Suleiman Franjieh, while others see that there are opportunities. To choose a third figure around whom most of the components agree, including the Lebanese army commander, General Joseph Aoun, whose election needs a constitutional amendment, since the constitution prohibits the election of an employee in the first category.

And after information was leaked about a meeting between the official of the “Liaison and Coordination” unit in “Hezbollah” Wafiq Safa during the last days with General Joseph Aoun, sources accompanying the meeting denied that the talks had touched on the presidential file. The sources put the meeting within the framework of “periodic meetings”, explaining in statements to “Al-Sharq Al-Awsat” that the meeting dealt with files related to coordination on the ground, adding that the meeting “is not the first between Safa and General Aoun, and it usually takes place for coordination matters and did not deal with the presidential file at all.”

In the context of the meetings between the political forces dealing with coordination in the file of the Presidency of the Republic, the head of the “Lebanese Forces” party, Samir Geagea, met a member of the “Renewal” bloc, Representative Ashraf Rifi, who confirmed that “the priority at this stage is the file of the Presidency of the Republic, and because it is our first concern to restore Public regularity to political life, especially since the country can no longer tolerate delay, procrastination and acrobatics.

He said, “It is an honor for us to have a candidate for the presidency in cooperation with the (Lebanese Forces), who is Representative Michel Moawad, while the other team hides behind the white paper to hide its internal division and its inability to unify its ranks.” Rifi added, “It is the first time that (Hezbollah) has not succeeded in unifying its internal ranks.” And holding “the responsibility for the delay in saving the country to everyone who obstructs the sessions to elect the president, whether in the first or second round,” Rifi affirmed their insistence on “following up hand in hand with (the forces) to reach safety, given that Lebanon is ours and will not be an Iranian province or part of it.” from Iran”.

The presidential vacancy file dominated the statements of officials on Independence Day. Caretaker Prime Minister Najib Mikati said: “We all hope that the deputies will cooperate to elect a new president; ushering in a new phase of recovery and advancement. We will also proceed with the national and constitutional work that is required of us, believing that independence is a daily struggle in all its forms, born of conviction from the human heart and the core of his conscience.

In turn, the Minister of National Defense in the caretaker government, Morris Selim, tweeted, saying: “The seventy-ninth anniversary of independence calls on all of us to assume our responsibilities to save our country from the unprecedented challenges it faces in its history. On this National Day, we renew our absolute confidence in our armed forces, and we appreciate their great sacrifices to preserve the homeland and preserve its independence.

For his part, the Minister of Interior and Municipalities in the caretaker government, Bassam Mawlawi, wrote on Twitter: “Independence … comes with bearing responsibility; In defense of the homeland, in order to preserve sovereignty and the finality of the entity, in order to preserve institutions and adhere to the legitimacy represented by the security forces and the Lebanese army.

The Minister of Public Works and Transport in the caretaker government, Ali Hamiyeh, stressed that “belief in the independence of the homeland lies in how to exercise responsibility in all its positions.” Thirdly, in how to deal with his problems, they are pillars that we prepare as a pure independence map that keeps us away from any begging or submission to anyone.

And as the head of the Lebanese Forces Party, Samir Geagea, affirmed that “independence will inevitably come,” the head of the “Marada” movement, former minister Suleiman Franjieh, said via Twitter: “We are all facing a real test to preserve the freedom and independence of Lebanon through unity, dialogue and openness.”

The head of the Free Patriotic Movement, Representative Gebran Bassil, tweeted, via his Twitter account: “A person is free when his decision expresses his conviction, and the official is sovereign and independent when his position stems from his conscience and the interest of his people and country.” He added, “The interest of Lebanon and the future of its young generations is above all interests and considerations. This is how we understand independence and live it, and nothing embarrasses us.” He continued, “This year there is a void in the memory of independence, and not only in its meaning.”

A member of the “Strong Republic” bloc, Representative Ghiath Yazbek, tweeted: “It is sad that we wake up on the morning of independence to flags lowered, an empty presidential palace, an army that does not display proudly, and children who do not wave flags and sing. O sovereigns, rise up, O hesitant ones, wake up from the coma of servility, so that we elect a president who resembles our dreams and sacrifices, in order to restore the republic.