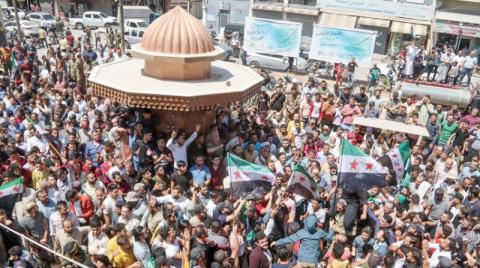 Turkey’s disclosure of a meeting between its Foreign Minister Mevlut Cavusoglu and his Syrian counterpart, Faisal Miqdad, and its declaration of support for “reconciliation” between the opposition and the government of President Bashar al-Assad, sparked a storm of anger in the areas controlled by its allies in northern Syria. While the opposition factions fear a “normalization” between Damascus and Ankara that will come at their expense and lead to a decline in Turkish support for them, the Kurds expressed fears of a Syrian-Turkish deal that threatens the gains they obtained during the years of the Syrian war.

In a move aimed at calming Syrians angry at its new position, Turkey confirmed yesterday that its position on the Syrian regime has not changed. In a statement, which included an explanation of Minister Cavusoglu’s statements regarding the need for reconciliation between the regime and the opposition, Turkish Foreign Ministry spokesman Tanju Bilgic said that Turkey supports a solution to the Syrian crisis that meets the “legitimate aspirations” of the people. He added, “The political track is not witnessing progress at the moment due to the regime’s procrastination.”

The Turkish “interpretation” of Minister Cavusoglu’s statements came at a time when thousands of Syrians took to the streets in mass demonstrations in the opposition-controlled cities and towns in the north and northwest of the country, under the title “No Reconciliation” and “We will perish and Assad will not rule us.” Some of them were interspersed with burning Turkish flags.

Commenting on the disclosure of the meeting between the foreign ministers of Turkey and Syria 10 months ago, Kurdish opposition member Ibrahim Berro, a member of the Kurdish National Council, told the Kurdish National Council that there are attempts to “normalize relations” between Damascus and Ankara, in addition to cooperation and intelligence coordination between them. And whether this normalization will be in the interest of Syria’s Kurds or against them, Berro added that “the Syrian people in general, and the opposition and the Kurds in particular, will be the losers.”
… More
… More