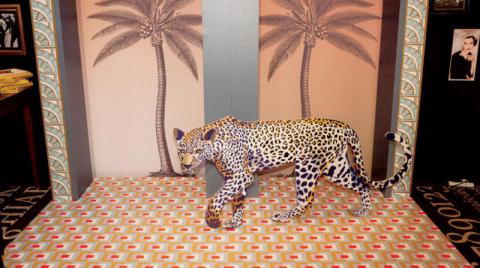 Princess Rima bint Bandar bin Sultan, Saudi Ambassador to the United States and founding chairperson of the “Catmosphere” organization, in the presence of Prince Khaled bin Bandar bin Sultan, Saudi Ambassador to Britain, inaugurated the book “The Arabian Tiger”, which documents with pictures and artworks the national efforts, through the strategy of the Authority. The property of Al-Ula Governorate in preserving the Arabian leopard and protecting it from extinction.

Princess Reema stressed during the inauguration ceremony of the Assouline Publishing House in London that the Kingdom’s efforts to protect the Arabian leopard are among the most prominent global models, which aim to preserve it and return it to its natural habitats, adding that the culmination of those endeavors was the celebration of the birth of an Arabian leopard cub.

The strategy of the Royal Commission for Al-Ula Governorate to preserve the “Arabian tiger” includes a variety of initiatives, including the expansion of the breeding program through the opening of the “Arabian tiger center” in the “Sharaan” nature reserve, in addition to the establishment of the “Arabian tiger fund” for which the authority was allocated The property is $25 million.
… More