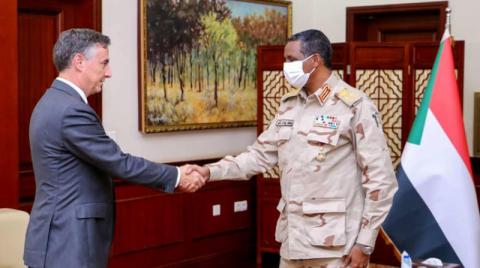 The European Union renewed its position on the parties to the crisis in Sudan yesterday (Thursday), by supporting all parties to resume the democratic transition process, and stressed that all those who committed human rights violations should be brought to justice, in cooperation with the International Criminal Court.

A high-level delegation from the European Union held, in Khartoum, yesterday, meetings with the political forces opposed to and loyal to the rule of the army, and renewed its position by supporting all parties to resume the process of democratic transformation in the country.

The head of the European delegation, David McAllister, when meeting yesterday at the Republican Palace, the Vice-President of the Transitional Sovereignty Council, Mohamed Hamdan Daglo (Hemedti), welcomed the withdrawal of the military establishment from the political process.

He affirmed the Union’s support for the efforts made by the tripartite mechanism to help bridge differences and facilitate democratic re-transition, noting the need for all actors to start building the political process.

McAllister stressed the start of the transitional justice process, and that all those who committed human rights violations should be brought to justice through the government’s cooperation with the International Criminal Court.

The main opposition coalition (Forces of Freedom and Change) said that the coalition’s foreign relations committee met with the European delegation, headed by McAllister.

The European official said that his main message during his one-day visit to Sudan was to affirm full and complete support for the Sudanese demand for democracy and democratic civil rule.

In a statement yesterday, the opposition coalition described the meeting with the European delegation as important, and referred to the discussion of issues of civil and democratic transition.

The coalition affirmed its readiness to engage in a credible process that leads to the establishment of a genuine democratic civil government as the basis for stability in Sudan and the region.

The coalition said: “We presented to the European delegation our vision of the necessity of stopping the violence that is being practiced against the mass movement by the coup authority and protecting civilians.”

The European delegation also met with the forces of national consensus, which supported the measures under which the Sudanese army seized power on October 25 last.

The Secretary-General of National Accord, Mubarak Ardol, said that the delegation came to listen to the views of the Sudanese parties. He added, “We assured them of the necessity of conducting a comprehensive dialogue with the parties without excluding any party, except for the (dissolved) National Congress Party, and that we all proceed to agree on a national mechanism to collect initiatives and pacts in one document to manage the transitional period, leading to the general elections in the country.”

Ardol indicated that the discussion with the European delegation touched on the relationship between the military and civilians, and what it should be for the stability of the country.

He called on the European Union to take a greater role in the political process and mediate between the various forces to reach a political solution.

Ardol stressed “the importance of resolving the outstanding issues between Sudan and Ethiopia in the border issue, and Sudan’s role in managing the Renaissance Dam and receiving information so that we are not harmed by floods and drought.”

It is noteworthy that the European Union had condemned the army’s seizure of power in the country, and threatened to suspend financial aid if a civilian-led authority was not formed in the country.