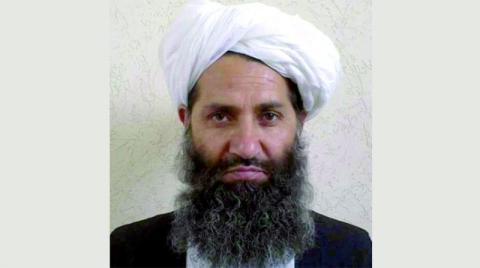 In his first public appearance, the reclusive Taliban Supreme Leader Hebatullah Akhundzada joined a large gathering of religious and tribal leaders in Kabul yesterday (Friday), and congratulated those present on the movement’s victory and its assumption of power in Afghanistan last August.

In an hour-long speech carried by the official radio, Akhundzada called on the countries of the world to stop interfering in Afghan internal affairs, adding: “They tell us: Why don’t you do this, why don’t you do that? Why does the world interfere in our affairs? We will not accept instructions from anyone in the world,” according to Agence France-Presse.

More than three thousand religious figures and tribal elders have participated since Thursday in the Afghan capital, in an expanded council that will last three days. The first speakers called, in particular, to unity in support of the regime.

In recent days, Afghan newspapers, whose representatives were not allowed to attend the meeting, have been littered with speculation about the possible participation of Akhundzadeh, who lives in seclusion in Kandahar. Audio recordings of him have been published since last August, although their authenticity could not be verified by an independent source.
… More