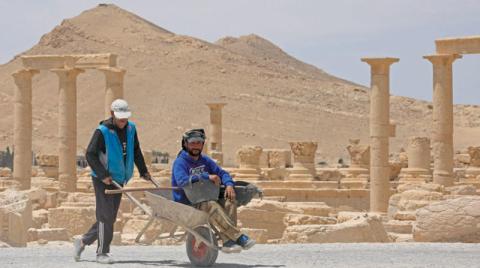 Tensions escalated yesterday (Friday) in the countryside of Aleppo, northern Syria, after an attack by an opposition faction loyal to Turkey on a bus carrying Syrian soldiers, killing 10 of them, in the largest death toll of its kind in the ranks of the regime forces in this area in two years.

There was confusion all day yesterday regarding the dead, as the Syrian Observatory for Human Rights reported that they were from pro-regime militias from the Shiite towns of Nubl and Zahraa in Aleppo countryside. However, the official Syrian news agency, SANA, said that a missile targeted a military bus, killing 10 soldiers and wounding 9 others.

In a report in the afternoon, the Observatory indicated that a child was killed and another wounded as a result of shelling carried out by opposition factions targeting the outskirts of the town of Nubl, coinciding with the funeral of the dead members of the militia loyal to the regime who were killed as a result of targeting a bus carrying them with a guided missile in the axis of Ain Jara – Qubtan al-Jabal in the western sector of the countryside Al-Halabi.” Information later reported that the Russian warplanes launched four air raids targeting the camps of the “Sultan Murad” faction in front of the village of Mashala, within the areas of influence of the Turkish-backed factions in the Kafr Jannah area in the northwestern countryside of Aleppo, according to the “observatory”.

In addition, the Syrian government announced that its defense means repelled Israeli missile attacks in the airspace of Masyaf in the Hama countryside (in the center of the country) and “brought down most of them”, announcing the death of five people.

Meanwhile, the Syrian government criticized the United States for granting licenses to carry out economic activities in the northeast of the country without being subject to the “Caesar’s Law” sanctions, accusing the Americans of “providing aid to armed terrorist organizations,” according to a statement by the Syrian Foreign Ministry. Turkey also criticized the US decision, considering it a kind of support and legitimization of the Kurdish People’s Protection Units.
… More