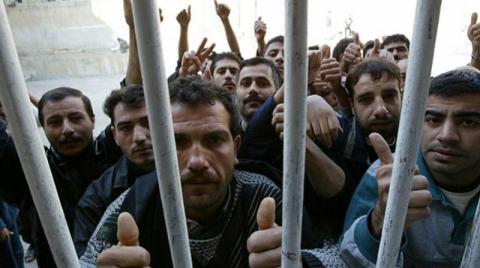 Civil sources that contacted Asharq Al-Awsat said that the family of the young man, Z. M» has been detained in prisons for ten years, and after she made great efforts to find out the fate of her son, but she did not succeed, she was informed two years ago by the authorities that her son had died in prison, and she saw his name included in the lists of detainees who died in prisons, which were circulated to the local administration departments In the provinces, I received his ID card.

The sources stated that the family, since that time, lost hope that their son would be alive, and did not care about the new amnesty decree. M» who was released under the amnesty decree. She pointed out that the state of astonishment mixed with joy, which affected family members when watching “Z. M”, which prompted some of them to closely scrutinize his features to make sure that he was really him, while he, despite his sickness and extreme fatigue that he appeared to be, would repeat the names of his father, mother, brothers and sisters and some of the names of his uncles, aunts and grandfathers, to confirm that he is “Z. M”, while his relatives and a number of his family’s neighbors gathered at home to congratulate.

The sources of the Syrian Observatory for Human Rights stated that recent days “have witnessed a decrease in the number of people released from the regime’s prisons under the presidential amnesty, as mass releases have stopped, and the matter is now limited to the release of detainees and prisoners individually from Adra prison and some of the regime’s security branches.” Pointing out that 1,142 detainees and prisoners were released from all Syrian governorates.
…More