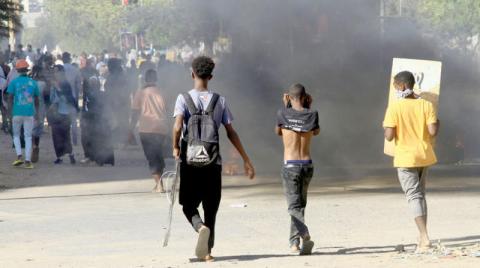 The Sudanese police dispersed crowds of protesters opposing the framework agreement signed between civilians and the military last Monday, who demonstrated at the invitation of the Popular Resistance Committees and the Communist Party, and fired tear gas at them heavily in the vicinity of the presidential palace in the capital, Khartoum.

A number of resistance committees, which are popular grassroots organizations that have been leading the popular movement against the coup of October 25 (October 2021), announced the monthly protests schedule that they used to, and it includes five central processions and two decentralized processions, while the authorities closed the “Al-Mak Nimr” bridge near the palace. Presidential Council and the main ministries, and kept the rest of the bridges open, unusually.

A number of political, societal and civil forces, most notably the opposition coalition “Freedom and Change” and the Democratic Unionist Party, signed a framework agreement last Monday that guarantees the army’s exit from politics, provided that the civilian components hold consultations among themselves on five issues: transitional justice, integration of forces And security reform, the Juba Peace Agreement, the issue of eastern Sudan and the dismantling of the Islamist regime.

The signatories to the framework agreement said that they will hold broad discussions with stakeholders and non-signatory political forces. In order to achieve the broadest political consensus before the final signing of the transitional constitution submitted by the Steering Committee of the Bar, which received wide international and regional support and acceptance, amid expectations of completing the consultations during the remainder of the year in preparation for the final signing before the end of this December.

A number of resistance committees rejected the agreement, considering it a recognition of the coup and giving it a legitimacy that it does not possess, and affirmed its adherence to the three “No’s”: “No negotiation, no recognition, and no partnership” with the putschists.

The committees pledged to overthrow the “settlement” and the coup, to restore the democratic civil transition and to avenge the killers of the martyrs, through peaceful action and protest processions that escalate until the stage of comprehensive civil disobedience is reached. The committees described the signatories to the political agreement as having “sold the blood of the martyrs,” while the Communist Party, which announced from the outset its adoption of the three “No’s,” rejected it and refused to work jointly with its former allies in “freedom and change.”

And she added, in a previous statement, that she would not accept what she called “a bargain that keeps the murderers and the betrayers of covenants, headed by Burhan and Hamidti, and the rest of the members of the Military Council, and we will never rest until we see them in prison.” an attempt to legitimize it.”

The police used tear gas extensively, as well as water cannons, to prevent the protesters from reaching the presidential palace. Reports on social media circulated news of the use of excessive violence by the security services in confronting the protesters, in addition to gas, sound bombs and rubber bullets.

The political agreement signed between the government, political and civil forces, armed movements, and the opposition coalition “Freedom and Change” faces rejection by the “Justice and Equality Movement” led by Jibril Ibrahim, and the “Sudan Liberation Movement” led by Minni Arko Minawi, in addition to Islamic currents and supporters of the Bashir regime, and a wing of The Democratic Unionist Party, led by Jaafar, the son of the leader Muhammad Othman al-Mirghani.

The head of the United Nations Transition Support Mission in Sudan, Volker Peretz, said in an interview with BBC TV broadcast yesterday that he sensed the seriousness of the Sudanese military component in its pledges to exit the political process, in a way that contributes to the implementation of the framework agreement signed between the army and civil forces. And he expected that an agreement would be reached at the end of the year and the beginning of next year, adding, “It is a first step to a final agreement… There are details that need discussions, agreements and experience from the African continent, on the approach of southern Africa, such as the experience of Rwanda in transitional justice.”

Volcker underestimated the influence of the obstructionists, saying, “It would have been better if – at least – the real parties from these forces joined the agreement, and we have great interest in them joining the second stage, and holding discussions about the sticking thorny issues, including the implementation of the Juba Agreement and transitional justice.”