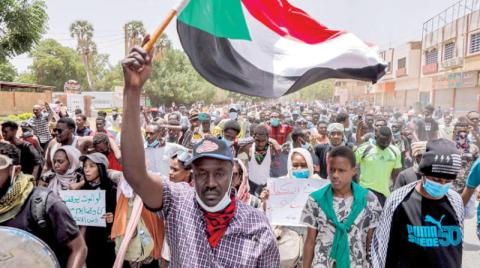 Protests renewed in the Sudanese capital, Khartoum, yesterday for the second day in a row, as the vicinity of the presidential palace witnessed a massive demonstration early Friday morning, but the security forces present in the area heavily responded with tear gas canisters to disperse the demonstrators. Meanwhile, another group of protesters in the Al-Dium area in central Khartoum staged a sit-in in front of a hospital where the wounded were treated, while other groups announced the escalation of scattered local protests and the closure of main roads.

Eyewitnesses said that the vicinity of the Republican Palace turned into a semi-military barracks teeming with soldiers and armored vehicles, while the “Al-Mak Nimr” bridge near the palace and all roads leading to it from all sides continued to be closed. The situation worsened with the funeral of the bodies of the dead who were shot dead by security forces in the “30th of June” memorial procession, the day before yesterday. The Central Committee of Doctors of Sudan stated that the death toll rose to 10 after another protester died of his wounds, adding that the number of dead since the army took power in October reached 112, in addition to 5,200 wounded.

For its part, the US Embassy in Khartoum said it was saddened by the loss of life, and urged all parties to resume negotiations, calling for the perpetrators to be held accountable. The UN Tripartite Mechanism also condemned the excessive use of force by the security forces, and expressed its “disappointment at the continued use of excessive force by the security forces, and the lack of accountability.” Western embassies, including the British Embassy, ​​and international human rights organizations also condemned the use of violence, and called for full and transparent investigations into the killings of demonstrators.

A number of embassies and organizations called for an end to arbitrary arrests, respect for the right to freedom of expression and peaceful assembly, and credible investigations into all violent incidents, to ensure an environment conducive to the success of the political process on which the tripartite mechanism is working.
… More