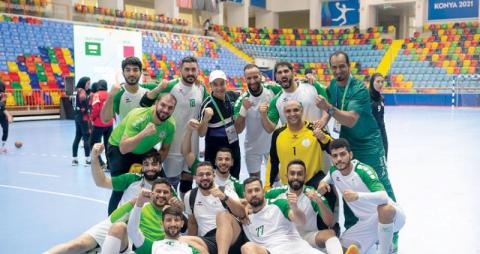 The weightlifter Al Saleem won the three medals in the 61-kg weight category, amid a great interaction from the audience and followers, after the great achievement of the Saudi champion in the tournament.

The Saudi handball team qualified for the semi-finals of the current edition of the Islamic Solidarity Games, after drawing 27-27 against its Qatari counterpart during the match that brought them together yesterday evening (Friday).

The Saudi team came at the fore in its first group, which includes neighboring Morocco and Qatar, after beating Morocco 29-25 and drawing with Qatar 27-27. Today, it will meet its Turkish counterpart in the semi-finals at three o’clock in the afternoon.

The player of the Saudi Taekwondo team, Ahmed Al-Mawlid, left the competitions -74 kg – after losing to the Lebanese Marc Zenon in two rounds against a round in the Islamic Solidarity Games.

Within the Romanian wrestling competitions, Saudi wrestler Misfir Al-Subaie finished his participation in the 63-kg weight category after losing to Azerbaijani Muhammedov Tal in the Fifth Islamic Solidarity Games.

The Saudi mission raised the number of its medals in the Islamic Solidarity Games to 15, with one gold achieved by the Saudi weightlifter, Mansour Al Saleem, in the snatch gold in the 55 kg weightlifting competitions, 10 silver and 4 bronze.