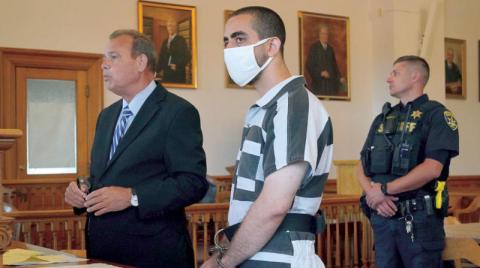 British writer Salman Rushdie is recovering, two days after he was stabbed in the stomach and neck by Hadi Matar, a young American of Lebanese origin.

Rushdie’s agent, Andrew Wiley, said in a statement that the writer is no longer dependent on respirators and “is starting to recover,” noting that “his injuries are serious, but his condition is progressing in the right direction.” Wiley had told the New York Times, on Friday evening, that “Salman will likely lose one of his eyes, his arm has been cut nerves, and his liver has been stabbed and damaged.” He was stabbed, noting that the British writer adhered to his “stubborn sense of humour”. Zafar Rushdi wrote on Twitter: “My father is still in a delicate situation in the hospital and is receiving intensive and continuous care.”

He added, “We are very relieved that he gave up the ventilator yesterday… He is no longer connected to the respirator, and he was able to say a few words.” “Although his injuries are serious and could change his life, his usual feisty and stubborn sense of humor has not been affected,” he continued.

This came the day after the perpetrator of the attack on Rushdie appeared before a judge in the state of New York, where he pleaded not guilty to the charge of “attempted murder”. The Public Prosecution considered that the attack on the writer was premeditated. The suspect, who lives in New Jersey, has pleaded his innocence through his attorney and will appear again in court on August 19.

In a related context, British police revealed that they had opened an investigation into a suspicious threat, which writer Jay Kay Rowling says she was exposed to on Twitter, after denouncing the attack on Rushdie.
…More