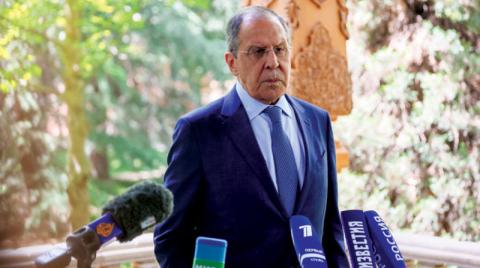 Lavrov said, in a speech coinciding with the entry of the 80th day of the Ukraine war, that “the entire West has declared a total hybrid war on us, the duration of which is difficult to predict, but it is clear that the repercussions will be felt by everyone without exception,” as quoted by “Reuters”. He added, “We did everything possible to avoid a direct clash, but now the challenge has been announced, and we accept it, of course.” Sanctions are not alien to us, they have always existed in one form or another.”

For his part, Russian President Vladimir Putin considered Finland’s ending its military neutrality through its possible accession to the North Atlantic Treaty Organization (NATO) as a “mistake”. This came in a telephone conversation between Finnish President Sauli Niinisto and his Russian counterpart, on the eve of Helsinki’s decision on its candidacy for NATO membership. In a statement issued by the presidency, the Finnish president said: “The conversation was frank and direct and there was no tension. I consider stress avoidance important. The call was made at the initiative of Finland.” Helsinki stressed that the Scandinavian country “wants to deal with the practical issues of being a neighboring country to Russia, in a correct and professional manner.”

In a related context, and against the background of the intensification of fighting in the Donbass region, the head of the Ukrainian Military Intelligence expected that the war in his country would witness a “turn” in August, expressing his “optimism” about the current development of the conflict. Kirillo Budanov said, in an interview with the British “Sky News” network, that the victory will not be “easy”, but “it will happen.” He added that “the turning point will be in the second half of August,” and “the majority of military operations will end by the end of the year,” claiming that Kyiv will succeed in regaining control of “all of its territory.”

On the other hand, after three days of marathon consultations led by the G7 foreign ministers in a retreat on the Baltic Sea in northern Germany, the member states agreed to continue tightening sanctions against Russia by targeting “the sectors that depend on it”, with the aim of increasing its political and economic isolation. The countries pledged to continue providing military support to Ukraine “as long as it needs it,” without specifying the size or type of this military aid.

The seven countries also pledged to work to avoid a global food crisis “caused by Russia.” German Foreign Minister Annalina Birbock, who chaired the meetings, revealed work on forming a working unit on global food security, and said that the G7 leaders’ summit would discuss it when it convenes next month. In its final statement, the Group of Seven called on Russia to lift the blockade on Ukraine’s ports, to enable it to export grain abroad.
…More