Renewed controversy in Iraq over the law on freedom of expression 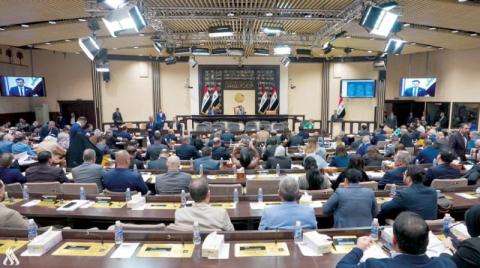 The debate over the Freedom of Expression Law in Iraq was renewed, yesterday, Saturday, after it was read for the first time in Parliament, and it is a debate that has been going on for years by activists and human rights and professional organizations defending freedom of expression that believe that the law in its current version hinders the emerging and faltering path of democracy in the country.

The objections as a whole have always prompted the House of Representatives to wait and pass its legislation and postpone it to subsequent sessions, in the hope that the subsequent reviews and amendments will be sufficient to convince the objectors and, therefore, not to object to its approval.

Yesterday, the House of Representatives completed the first reading of the draft law on “freedom of expression, assembly, and peaceful demonstration,” prepared by the Parliamentary Human Rights Committee.

The Kurdish “New Generation” movement, which has 9 parliamentary seats and is allied with the “Emtidad” movement, which has ten seats, was the first to object to the draft law, and it is the first time that a parliamentary bloc has advanced in the ranks of those opposing the legislation of the law. The head of the Parliamentary Movement Bloc, Sarwa Abdel Wahed, announced her rejection of the law, and the rejection of a group of independent deputies in Parliament, and called on media professionals and civil society organizations to stand with the opponents because it was not approved by parliament.

Abdel Wahed said, in a statement, “Iraq does not need to legislate a law on freedom of expression because it is guaranteed by the constitution within Article 38, and there is no indication that it is regulated by law.” And revealed that “the start of collecting signatures to withdraw the law for the purpose of amendment,” calling on journalists, media professionals, activists, civil society organizations and the Iraqi popular street in all its sects to “stand against this law and not allow parliament to legislate it.” And she stressed that “the law includes many penalties and penal clauses on the issue of the right to demonstrate, peaceful assembly, and obtaining permission to demonstrate before a certain period, and there are rubber terms and phrases that anyone can use against everyone who wants to demonstrate and express their opinion.”

The head of the Freedom of the Press Organization, Mustafa Nasser, told Asharq Al-Awsat that “the law was presented and discussed in Parliament without taking into account the amendments made by Parliament during the two previous sessions, which took into account the serious objections raised by activists and organizations. This is a kind of blackmail operation.” For civil society, in addition to the fact that the absence of an objection process from the Journalists Syndicate and the Broadcasting Corporation is shameful.

Nasser adds, “The most prominent objections are the combination of freedom of expression and the press with the right to demonstrate. The constitution guarantees freedom of expression and the press in all its forms, and also guarantees freedom of demonstration, but it has not yet been regulated by law… The second article of the law refers to the regulation of freedom of expression, which is absolute freedom and is not regulated and guaranteed constitutionally. Nasser believes that “some parliamentary parties seek to circumvent serious objections to the law by making some minor concessions so that the law appears acceptable, such as the issue of the law guaranteeing the right to private meetings, although this issue is constitutionally and legally guaranteed, or with regard to the freedom of scientific research that is also guaranteed.” .

He explains, “We have serious objections and problems about 17 articles of the law, and we reached an agreement with the Parliamentary Human Rights Committee in the previous two sessions to amend part of it, but it was not taken into account in the current session.”