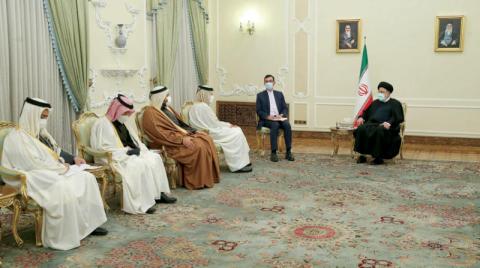 Yesterday, Qatari Foreign Minister Mohammed bin Abdulrahman Al-Thani visited Tehran, including his meeting with President Ibrahim Raisi, in the midst of the ongoing negotiations in Vienna regarding reviving the nuclear agreement.

A Qatari government official in Doha said that “Qatar is trying to help” in reviving the nuclear agreement, and this matter “will be discussed between Emir Sheikh Tamim and US President Joe Biden in Washington, on Monday.”

And she added, “Although Doha and Tehran have good and close relations, this visit … raised some misperceptions, and some created them to facilitate direct talks with the United States.”

Abdullahian had visited Doha on the 11th of this month and met the Emir of Qatar, Sheikh Tamim bin Hamad Al Thani, and the Minister of Foreign Affairs, Sheikh Mohammed bin Abdul Rahman. Reuters quoted an informed source as saying that Abdullahian asked Qatar at the time to mediate in the case of prisoners held by Iran with dual nationals, especially American and European.
… More