Powell hints at two rate increases in the next two months 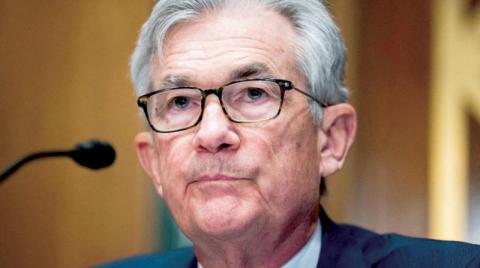 Powell hints at two rate increases in the next two months

In his first comments after his new term was confirmed, Federal Reserve Chairman Powell confirmed on Friday the possibility of raising US interest rates twice by half a percentage point (50 basis points) each time during the Fed’s monetary policy committee meetings in June ( The next June and July, while leaving the door open to the possibility of increasing interest rates even more.
Powell said in a radio interview that he is determined to control the high rate of inflation in the United States, acknowledging that the ability of the Fed to achieve this without entering the economy into a recession may depend on other factors beyond his control.
“If the economy’s performance is in line with expectations, it may become appropriate to increase the interest rate by 50 basis points during the next two meetings,” Powell was quoted by Bloomberg News as saying. In response to a question if he was ruling out the idea of ​​a 75 basis point rate increase, Powell said that the board had not taken that idea out of discussion.
Powell began (Thursday), his second term at the head of the “Federal Reserve” after the Senate approved the option of President Joe Biden, and at a time when the bank is fighting inflation in order not to affect economic growth.
The full Senate voted, as expected, for “Jay” Powell, 80 to 19, and the 69-year-old former lawyer and banker, who will head the Federal Reserve for another four years, will have to slow inflation but with Ensure that this does not lead to a downturn in the economy or affect jobs.
“The Federal Reserve plays a key role in fighting inflation,” Biden said in a statement. So far, Powell has been reassured that the monetary institution has the “tools” needed to achieve this. However, he warned (Thursday) that controlling inflation “will not take place without pain”, considering in a radio interview that “the most painful thing will be for inflation to remain firmly entrenched in the economy at high levels.”
Some senators blame Powell that he did not expect this huge and permanent rise in prices, including Republican Richard Shelby, who voted against his re-election on the grounds that “Powell and the rest of the Federal Reserve have failed the American people.”
Democrat Bob Menendez also voted against Powell’s re-election, but for other reasons, saying that “under President Powell’s leadership, the Fed continued to miss critical opportunities to appoint Latinos to the highest levels of its leadership.”
Powell had been governor of the Federal Reserve since 2012, and former President Donald Trump appointed him to head this institution in 2018, before he later angered him. Powell succeeded in this position, Janet Yellen, who has become the Secretary of the Treasury in the Biden administration.
This Republican, who is considered a consensus, had confirmed during his candidacy last November that the “Federal Reserve” would work “to prevent the entrenchment” of inflation. But the price curve has continued to climb ever since.