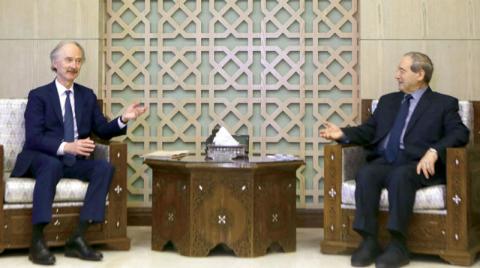 Yesterday (Wednesday), the United Nations Special Envoy to Syria, Geir Pedersen, identified 6 priorities for initiating a political solution to the crisis in Syria, acknowledging that the country is “de facto divided” and that he is “not making substantial progress” in his efforts to reach an agreement between the two countries. regime and opposition.

“The Syrian people remain trapped in the depths of an extremely complex humanitarian, political, military, security and economic crisis on an almost unimaginable scale,” Pedersen told members of the Security Council meeting in New York, adding that “Syrians remain deeply divided over their future.”

The UN envoy reiterated that “the country remains, de facto, divided into several parts,” in which five foreign armies, armed groups and a list of active terrorists are deployed.

Pedersen spoke of a crisis of “epic proportions,” acknowledging that he “is not making substantial progress in building a common political vision for that future through a real political process.” He expressed his regret that “a solution is not imminent.”

Pedersen explained that he has priorities that include “the need to de-escalate,” focusing “on the humanitarian front,” “resuming the work of the Constitutional Committee” in Geneva, “continuing to advance the issue of detainees, missing persons, and abductees,” and “achieving the initial confidence-building step by step.” And dealing with the Syrians in all fields.

On behalf of the Under-Secretary-General for Humanitarian Affairs and Emergency Aid Coordinator Martin Griffiths, Ghada Al-Taher Mudawi, responsible for the Operations and Advocacy Department at the United Nations Office for the Coordination of Humanitarian Affairs, spoke about the humanitarian situation in Syria, which is “one of the most complex humanitarian and protection emergencies in the world.” “More people need help than at any time since 2011,” she said. “We need a renewed commitment from all sides,” she said. We need better access. We need an ever-generous donor and quick pledges.”

Coinciding with Pedersen’s briefing to the members of the Security Council, representatives of the United States, Germany, Britain and France met at the level of envoys in Geneva with the UN envoy, and issued a joint statement in which they reiterated “our firm support for Pedersen’s efforts” to “reach a political solution to the Syrian conflict in line with And Security Council Resolution No. (2254)”, including “a cease-fire, the release of any arbitrarily detained persons, free and fair elections, and the need to create conditions for the safe, dignified and voluntary return of refugees and displaced persons.”
… More

Lebanon is looking forward to meeting Paris tomorrow, after the failure of the…

A new European confirmation of the refusal of normalization with Assad