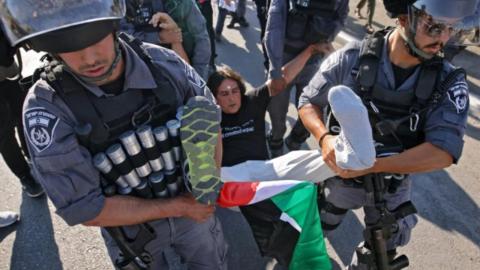 The Palestinians on Thursday said any move by Britain to move its embassy in Israel from Tel Aviv to Jerusalem would be “a blatant violation of International law”.

British Prime Minister Liz Truss, in New York for the UN General Assembly, told her Israeli counterpart Yair Lapid on Wednesday “about her review of the current location of the British embassy in Israel”, Downing Street in London said.

Such a move would follow former US president Donald Trump’s controversial decision to move the American embassy to Jerusalem, a move which exacerbated a deadly collision between Israeli security forces and protesting Palestinians in May 2018, AFP said.

After their meeting Lapid tweeted his thanks to Truss for considering such a move, but it sparked a firm response from the Palestinians.

“It is extremely unfortunate that Prime Minister Liz Truss uses her first appearance at the UN to commit to potentially breaking international law by promising a ‘review’ of the location of the British embassy to Israel,” the Palestinian ambassador to the United Kingdom tweeted.

“Any embassy move would be a blatant violation of international law and the UK’s historic responsibilities,” Husam Zomlot wrote in English.

“It generals the two-state solution & enflames an already volatile situation in Jerusalem, the rest of the occupied territories and among communities in the UK and worldwide. Such promise is immoral, illegal and irresponsible!”

Jerusalem is home to both the holiest place in Judaism and the third-holiest in Islam.

Palestinians claim the Israeli-annexed eastern part of the city as their own future capital as part of a two-state solution.

US President Joe Biden has renewed Washington’s long-standing call for a two-state solution, but has not reversed Trump’s controversial decision to recognize Jerusalem as Israel’s capital.

A book chronicling the rule of the Baath in Iraq: 35 years of deception, murder and…

Where has Agatha Christie gone?

Riyadh International Book Fair opens its doors with the participation of 1,200…

The return of armed manifestations to the “capital of the Revolutionary…