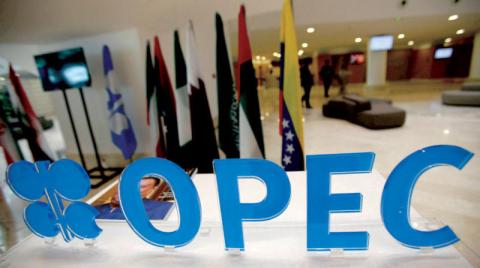 Flags of member states at the entrance to the OPEC headquarters in Vienna, as all eyes turn to the meeting next Sunday (Reuters)

Oil prices rose during trading yesterday, Wednesday, by more than 3 percent, due to hopes for a recovery in Chinese demand, in addition to expectations that “OPEC Plus” will maintain its production policy in the meeting next Sunday, which increases the stability of the market. Brent crude rose 3.3 percent to hit $87.05 a barrel by 14:42 GMT, after hitting $87.37 during the session, and US crude rose 3.4 percent to $80.93 a barrel, after hitting $81.38 during the session.
Reuters quoted unnamed sources as saying that the decision of “OPEC Plus” to hold its meeting on the fourth of December (December) by default indicates the weak possibility of changing the policy at a time when the group is assessing the impact of setting a ceiling on the price of Russian oil on the markets.
The virtual meeting will focus on the EU’s imminent deal to cap the price of Russian oil before the bloc’s Dec. 5 deadline for a complete embargo on purchases of seaborne Russian crude. Yesterday, the Russian Foreign Ministry said that the Western countries’ proposal to put a ceiling on Russian oil prices is a “market-damaging” measure that would disrupt supply chains and worsen the situation in global energy markets. “(OPEC Plus) prefers to wait at this time and evaluate the outcome of what will happen on Monday,” the source said, according to Reuters.
The Organization of the Petroleum Exporting Countries and allies, including Russia, meet in what is known as “OPEC Plus”, at a time when China’s imposition of a closure due to (Covid-19) affects demand and prices. However, on Wednesday, oil gained support from hopes for a recovery in Chinese demand.
Sources said that OPEC turned a meeting of its ministers that was scheduled for Saturday into a virtual meeting, and OPEC Plus canceled the meeting of oil market experts, which is the meeting of the Joint Technical Committee that was scheduled for Friday.
In October, OPEC Plus agreed to cut production by two million barrels per day, equivalent to 2 percent of global supplies, and this is valid until December 2023.
And Saudi Arabia, the largest exporter in {OPEC}, said on November 21 that {OPEC Plus} is committed to reducing production, and may take more measures to balance the market. Analysts and some OPEC Plus delegates said that another cut should not be ruled out on Sunday, but two delegates, according to Reuters, reduced the possibility of this happening.