Nadim Cherfan dreams of “Mayass” to the world 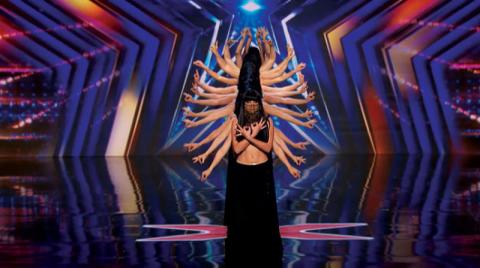 Nadim Cherfan dreams of “Mayass” to the world

The Lebanese cried as they watched a dance performance by the “Mayas” band, in the episode of the “America’s Got Talent” program, after the team had the chance of a lifetime when Sofia Vergara in the jury pressed the golden button (Golden Buzzer), to qualify the team for the stage of direct performances. The team had passed other stages that it had to go through to prove its worth and reach the semi-finals.
Nadim Cherfan pursued his dream to the world, and he was not satisfied with winning the “Arabs’ Got Talent” title in his last season. He carried his dance team “Mayas” to the world through his participation in the program “Britani’s Got Talent: The Champions”.
Nadim continued to strive and struggle until he reached the stage of “America’s Got Talent”. There, in the team’s first appearance on stage, the American star Vergara pressed the golden button. It is the button of luck, as the participants in the “Arabs Got Talent” call it, as it enables the participating talent to pass several stages and qualify for direct performances.
This scene, which depicts Vergara pressing the golden button, was widely circulated by the Lebanese, and the “Mias” band topped the trends on social media. This situation formed the energy of relief for the Lebanese, who yearn for a space of hope that would provide them with a whiff of oxygen in light of the deteriorating conditions they are living in.
Shirfan had kept this news secret for about a month, so he did not announce it based on the advice he received from the “America’s Got Talent” team. He was asked not to disclose the event before the episode was shown on American television.
And two days before the date of the presentation of the episode that authorized him to qualify for the semi-finals stage, Shirfan gathered those close to him to announce the news to them. At the Biel Center, Shirfan’s family members and some friends accepted the invitation, in addition to the two doctors, Dr. Zahi and Fadi Al-Helou, the organizers of the “Murex d’Or” award, who honored Shirfan in the recent past, in recognition of his creative art in the world of dance.
In an interview with Asharq Al-Awsat, May Ziada, who attended the event, said: “The number of people who attended this invitation did not exceed the number of fingers. The curators of the “America’s Got Talent” program warned him to refrain from announcing the news until they gave him the green light, or else he would lose this opportunity.”
Ziadeh, who is close to Shirfan, tells us about the atmosphere that permeated this narrow invitation: “The emotion was evident on the faces of all those present. Some of us even cried for joy when watching the band’s dance clip. She adds: «It was like a spot of light that flooded us after the world narrowed us down in Lebanon. Nadim was also moved, and I was waiting for the day when I would be allowed to talk about it. Since Sunday until today, my heart has been dancing with joy and my eyes are subconsciously tearing up from the intensity of my impact on the news, and I kept the matter as I was asked. The attendance at that time was limited to those close to me only, and the media people were absent so that the news would not be leaked.”
Ziadeh, who previously handed Shirfan his award at the “Morex d’Or” ceremony, is proud that he is the son of her hometown of Qartaba. In the context of her speech, she says: “It is a challenge that Nadim wanted to take on at all costs, especially since his team consists of women only. This made his task more difficult, because Lebanon and the Arab world do not like the arts of dance much, and do not support them.”
As for Nadim Cherfan, who is completely absent from hearing, he posted on his personal account on “Instagram”, the video clip from the “America’s Got Talent” episode, and wrote: “All my life I have heard this word (Nadim, you are not in Lebanon, you must travel). But I reached the world from Lebanon and I will not leave it, because Lebanon did not leave me, and I love you, my country.”
The Lebanese and Arab group “Mayas” is the first to ascend the stage of “America’s Got Talent”, and thus the first to receive the Golden Buzzer in the international program.
As for Vergara, who gave this golden opportunity to the Lebanese band, she tweeted: “This is the most beautiful thing I have ever seen, Bravo. What an honor it is for me to give you the golden buzzer!! I am so excited to see you again.”
The band expressed its happiness with this victory over “Social Media”, and commented on “Instagram”: “Lebanon, you are the best country that has loved you and promised you what you have done here.”
Before the team launched its dance show in the episode, a member of the all-women troupe explained, in a photo reportage, that the dream that the team seeks to achieve is to shed light on what Arab women can do, and that they are able to create arts.
The repotage includes the girls of the team participating in the dance board, and they introduce themselves. Among them are Jana, Lilia, Joanna, Riya and Nicole, while one of them told her story with Nadim, whom she has known since her childhood. She added that she did not hesitate to join his band “Mayas”, which presents dance paintings out of the ordinary, as part of an artistic technique launched by Nadim Cherfan from his position as the band’s coach.