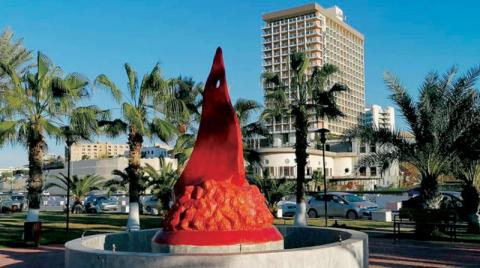 Pictures circulating of a memorial on social media in Libya attracted the attention of many sectors of politicians and citizens, sparking a wave of sarcasm, amid questions about the party behind this sculpture or the artist who designed it.
The critics went to great lengths to describe what they believed to be a “monument” standing in the shape of a “cone” in the capital, Tripoli, each according to his vision, considering that such statues, which they said, were “devoid of any aesthetic touch, reflect low taste, and increase the waste of money.” year».
However, the municipality of “Tripoli Center”, and in the face of the rising wave of ridicule, revealed that the object of criticism was built 19 years ago from now, and said: “It was noticed recently, through social media pages, that some citizens were surprised by the engineering and design of the model located in the marine passenger terminal in Al-Shaab port in Tripoli.” .
And the municipality stated in a press statement, the day before yesterday evening, that the model “was designed by the company executing the marine passenger terminal for Al Shaab Port in 2000,” noting that it symbolizes “a ship hook and quarry soil; It was repainted orange in 2014, during maintenance of the station and the adjacent park. To further defend itself in the face of the campaign of ridicule, the Municipality of Tripoli said: “The work is not new, and it is inside the campus of the passenger terminal in the Al-Shaab port, and it is not in a public place, and the authority responsible for removing it or not is the Ports Authority.”
Such statues and figures that appear in some Libyan cities from time to time arouse the citizens’ grievances, and bring back to their minds the “naked belle” statue, whose disappearance from the heart of the capital is still a mystery to them.
And the statue, which was standing in the middle of a fountain in a square known as “Ghazala Square” on the Mediterranean coast, has not yet been claimed by any party responsible for its theft.