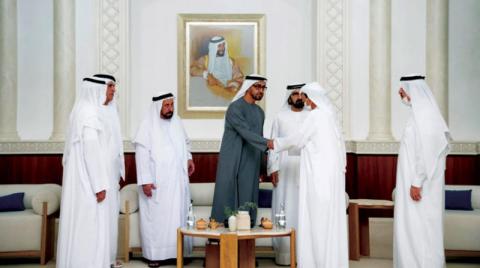 The Supreme Council of the Federation in the Emirates unanimously elected Sheikh Mohammed bin Zayed, ruler of Abu Dhabi, as the head of state, to succeed the late Sheikh Khalifa bin Zayed, who passed away on Friday, May 13, 2022. His election was widely welcomed by the Arab world and internationally.

The members of the Federal Supreme Council affirmed their keenness to fulfill the original values ​​and principles established by the late Sheikh Khalifa bin Zayed from the late founder Sheikh Zayed bin Sultan Al Nahyan, which established the position of the United Arab Emirates at the regional and global levels and strengthened its various national achievements.

For his part, Sheikh Mohammed bin Zayed expressed his appreciation “for the precious trust placed in him by his brothers, Their Highnesses Sheikhs, members of the Supreme Council of the Union, rulers of the Emirates, praying to God Almighty to help him and help him to bear the responsibility of this great trust and fulfill its right to serve his country and the loyal people of the Emirates,” according to Emirates News Agency (WAM).

The election of Sheikh Mohammed bin Zayed as head of state was accompanied by a wide international and Arab welcome, as cables of congratulations continued and some leaders began to go to the Emirates to offer condolences on the death of the late, and to congratulate the new president.

The Saudi leadership congratulated Sheikh Mohammed bin Zayed on his election as president. The Custodian of the Two Holy Mosques, King Salman bin Abdulaziz, said in a telegram sent to Sheikh Mohammed bin Zayed: “We are pleased on the occasion of your election by the Supreme Council of the Union as President of the sisterly United Arab Emirates, to express to Your Highness the most sincere fraternal congratulations, asking God Almighty to reconcile your Highness and help you. He will direct your steps to serve the United Arab Emirates and its people, to continue the path of goodness and development that your father, Sheikh Zayed Al Nahyan, and your brother, Sheikh Khalifa bin Zayed Al Nahyan, may God have mercy on them. He added, “We look forward to continuing to work to consolidate the bonds of brotherhood and friendship between our two brotherly countries and peoples, and to work together to strengthen relations between the countries of the Cooperation Council for the Arab States of the Gulf and the Arab and Islamic nations, wishing you good health and happiness, and your brotherly country more security, prosperity, stability and prosperity.”

For his part, Prince Mohammed bin Salman, the Crown Prince of Saudi Arabia, said in a telegram sent to Sheikh Mohammed bin Zayed: “I am pleased on the occasion of your election by the Supreme Council of the Union as President of the sisterly United Arab Emirates, to send to Your Highness the most sincere congratulations coupled with my best wishes for good health and happiness. May God Almighty grant success, help, and direct your steps to serve the United Arab Emirates and its people, and to continue the development process in your brotherly country, wishing the sisterly United Arab Emirates more security, prosperity, stability and prosperity.

Global concern over a new virus