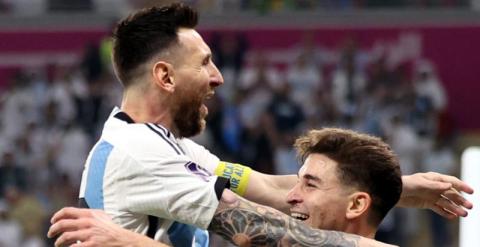 Messi celebrates with teammate Alvarez after his goal against Australia (EPA)

Lionel Messi scored a goal in his thousandth match to lead Argentina to a 2-1 victory over Australia and qualify to face the Netherlands in the quarter-finals of the 2022 World Cup in Qatar.
And in search of winning the World Cup title for the first time in his fifth and likely last participation, Messi hit a powerful ground ball into the net of goalkeeper Matt Ryan at Ahmed Bin Ali Stadium in the 35th minute.
Julian Alvarez added the second goal for Argentina, the world champion twice, from close range in the 57th minute, after a fatal mistake by goalkeeper Ryan.
Australia, which achieved the achievement of reaching the round of 16, reduced the difference when Craig Goodwin hit a ball that hit his opponent, Enzo Fernandez, and accidentally entered his own goal in the 77th minute.
Messi, 35, reached his third goal in the ongoing World Cup in Qatar, but raised his score to nine goals in the World Cup and is one goal ahead of the late legend Diego Maradona, former Argentine captain.