Markets improve at the end of a volatile week 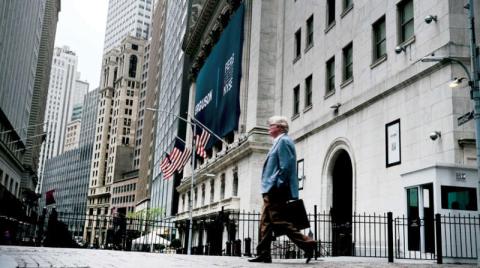 Markets improve at the end of a volatile week

Wall Street’s main indexes opened higher on Friday at the end of a turbulent week marked by increased fears of monetary tightening and slowing economic growth, while Twitter’s stock plunged after Elon Musk suspended the takeover of the social media platform.
Trading in global markets, especially US stocks, witnessed a sharp fluctuation this week as investors anticipate tightening financial conditions as the Federal Reserve prepares to raise interest rates several times to contain high inflation.
The Dow Jones Industrial Average rose 233.56 points, or 0.74 percent, to open at 31,963.86 points. The Standard & Poor’s 500 index rose 33.82 points, or 0.86 percent, to open at 3,963.90 points. The Nasdaq Composite Index rose 185.01 points, or 1.63 percent, to 11,555.98 at the open.
In turn, European shares rose in early trading on Friday, and the European Stoxx 600 index rose 0.7 percent by 07:10 GMT, and banks, oil, gas and technology companies led the morning gains… Despite Friday’s gains so far, the Stoxx 600 index is expected to record a decline For the fifth week in a row.
The Japanese Nikkei index also recorded the highest increase in more than a month and a half as investors sought cheap shares, and SoftBank Group shares topped the gains.
The Nikkei jumped 2.64 percent to close at 2,6427.65 points, the highest daily increase since March 23, recovering from a drop to a two-month low recorded in the previous session. The index lost 2.1 percent this week. The broader Topix index rose 1.91 percent to 1864.20 points, and recorded a decline of 2.7 percent during the week.
For its part, gold prices fell on Friday, heading towards the fourth consecutive weekly decline, due to pressures stemming from the rise in the dollar and expectations that the US Central Bank will raise interest rates at a significant rate.
And gold fell in spot transactions 0.2 percent to $ 1817.39 an ounce (an ounce) by 10:39 GMT, after reaching $ 1810.86 an ounce, the lowest level since the seventh of February (February). And gold lost more than three percent this week. And US gold futures fell 0.5% to $ 1816.40 an ounce.
The dollar index rose for the sixth week in a row, hovering near its highest level in 20 years, with continued fears that the Fed’s moves to confront inflation pressures would negatively affect global economic growth. Raising the US interest rate and increasing the yield on Treasuries increases the opportunity cost of holding gold.
As for other precious metals, silver increased 0.6 percent to $ 20.78 an ounce, but it fell seven percent this week in the largest decline since the end of January.
Platinum rose 0.7 percent to $950.06 an ounce. And palladium rose 1.5 percent to $ 1936.55 an ounce. Platinum and palladium are heading towards recording weekly losses.

Global concern over a new virus