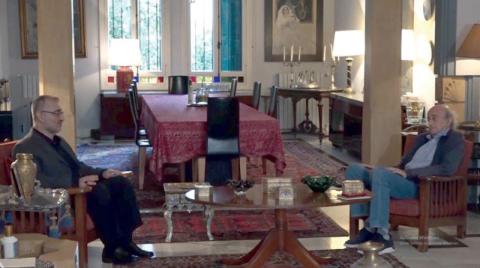 He informed his delegation that he was not ready to agree to a “reluctance” president.

The political center in Lebanon was preoccupied with keeping up with the atmosphere of the meeting that took place the day before yesterday (Thursday) between the head of the Progressive Socialist Party, Walid Jumblatt, and a delegation from Hezbollah, headed by Hussein Khalil and its deputy secretary general, Hassan Nasrallah.

Asharq Al-Awsat learned from sources closely related to the atmosphere of the meeting that Jumblatt touched on basic issues from the site of disagreement related to Hezbollah’s weapons, the defense strategy, and the need to “Lebanonize” the occupied Shebaa Farms, by asking the Syrian regime to prepare a document to be handed over to the United Nations in which it recognizes the Lebanese farms. To be attached to International Resolution No. 425.

Jumblatt asked about the possibility of a new war with Israel, and Khalil’s response was: If Israel continues to deprive Lebanon of its right to its marine wealth, it could be the stage of salvation, especially since all options are on the table. New, especially in light of the difficult circumstances we are going through. I advise and call for negotiations on the one hand and an international and Arab move to put pressure on Israel on the other hand.”

The sources confirmed that the entitlement to the presidential elections was present during the meeting, from the point of view of Jumblatt’s unwillingness to run a candidate belonging to the “March 8” forces and through them to the “Axis of Resistance.” There is a need to conduct a wide range of meetings and consultations in order to reach an understanding on the new president, without excluding any party, in reference to the involvement of the “Lebanese Forces” party in them.
… More