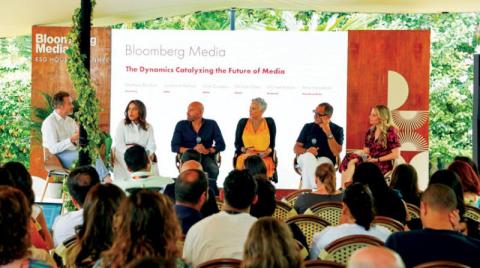 From digitization opportunities to training programs through “Metaverse”, Jumana Al-Rashed, CEO of the Saudi Research and Media Group (SRMG), discussed the developments of the media scene in the Middle East and North Africa regions, and its future directions, on the sidelines of the Cannes Lions Festival for International Creativity.

Al-Rashed presented the goals of the digital transformation strategy that she is leading, in a seminar organized by Bloomberg and moderated by Matthew Bloxham, Senior Analyst at Bloomberg Intelligence, with the participation of Mark Douglas, CEO of MNTN, and Michel Guy, CEO of EBONY & Jet. Michael Cassin, CEO of MediaLink, and Ann Kawallersky, CEO of Global Marketing, Bloomberg Media.

The digital revolution, experienced by the global media scene, provides wide opportunities for creativity and the provision of news and entertainment content, in innovative forms, across different platforms.

The Saudi Research and Media Group has joined this global trend, through a broad digital transformation that includes its various platforms, and harnesses modern digital media in transmitting its political, economic, sports and artistic news, and expanding its audience.

Its CEO said: “The media scene is changing at a very rapid pace, and it presents new opportunities that we seek to exploit, and challenges that we interact with.” Al-Rashed considered the factor of stagnation and the decline in the ability of media institutions to keep pace with the aspirations of the public and interact with digital transformation, as one of the most important challenges facing publishers, content makers and media organizations today.

In response to this challenge, the group launched its digital transformation strategy, which, according to Al-Rashed, is not limited to “digitizing” media only, but also goes beyond it to anticipate developments and meet consumer needs, desires and aspirations.

The group’s strategy focuses on digitizing platforms, as well as launching a number of new projects, including, for example, cooperation with “Bloomberg” in launching “Al Sharq Bloomberg”, the first multi-service platform in the region targeting the recipient wherever he is, whether through the TV channel or social media. or audio products.

The group was not satisfied with this, and launched two new projects aimed at anticipating the development of the media scene, namely “SRMG Labs”, to keep pace with the rapid technical development and the development of new projects, as well as creating the appropriate technical environment to incubate creative ideas in the press and content industry, as well as “SRMG X” for development and expansion. In events, conferences and exhibitions, take advantage of the content and enrich the experiences emanating from the digital world.

For his part, Mark Douglas spoke about the experience of digitizing the television industry in the United States through streaming, which provided great opportunities for creativity. He said that the consumption of television and the hours of interaction with it at the local level exceeds the size of the use of social media, but the size of “Facebook” represents twice the size of the entire advertising industry in the United States. Douglas sees a huge opportunity in changing the direction of the industry from a focus on a few thousand leading advertising companies, to hundreds of thousands of small and medium companies.

Interact with the recipient

The participants in the symposium unanimously agreed on the importance of understanding and keeping pace with the recipient’s interests and responding to his aspirations. In this context, Michel Guy said: “It is necessary to know the consumer and the nature of the content he wants to obtain,” pointing out the importance of using data and technology to achieve this. “(Our platforms) should not be separated from the human experience,” she added. She also pointed out that this experience differs with different industries: “In the field of marketing, for example, ads will not receive interaction, if they do not reflect the image of the recipient and his interests.”

In the context of the Middle East region, Al-Rashed considered digital transformation essential to reach a large segment of recipients in the Middle East and North Africa, pointing out that the ages of 70 percent of the population of Saudi Arabia, and 60 percent of the population of the Gulf Cooperation Council countries are between 30 and 35 years old.

Al-Rashed stressed the need to transcend traditional models of media consumption in order to respond to the aspirations of the new generations, pointing out in this regard to the group’s acquisition of Eight Publishing and Distribution Company, one of the most prominent companies producing documentaries and one of the most pioneering podcast platforms in the region.

For her part, Kawalersky said that Bloomberg Media organizes studies to identify the interests and goals of the modern reader, which in turn contributes to defining the direction of our partnerships, our product strategy, and our communication plan. Accordingly, Bloomberg recently launched a number of new products, including Bloomberg Green, which focuses on the climate, Bloomberg Crypto, which examines the future of digital currencies, and the future of work, a project that will be launched later this year.

The symposium addressed the opportunities and challenges posed by “Metaverse” in the media and entertainment industry. Al-Rashed said that it has become a reality, and that the media industry is now exploring the place of its platforms within it. However, this virtual space is still in the early stages of development, and defining it in a uniform and comprehensive way may take 5 to 10 years. Al-Rashed believes that the process of development witnessed by “Metaverse” provides an opportunity for media organizations to crystallize the form of news and the way it is transmitted and interact with the recipient in this space.

Michael Cassin agreed with Al-Rashed’s proposition, and said, in turn, that “metaverse has become a reality”, although the world is still ignorant of a lot about it. The CEO of Media Link said that the first step that institutions should take to access this space and understand its challenges and opportunities is education, revealing that he attended a training course at Wharton University on “Metaverse” and the “Blockchain” economy.

Cassin summarized the most prominent issues that lead discussions about the transformation of the media and marketing industries at Cannes Lions this year into 10 pivotal areas: trust, transparency, skill, technology, transformation, content, society, creativity, culture, and commerce.

The Saudi Research and Media Group pays special attention to training programs as part of its digital transformation strategy. Al-Rashed said: “We seek to train, develop and enhance the skills of new generations of content makers, technical innovators, journalists and administrators, to enable them to lead the media scene in the region.” She considered that the realization of these programs would enable the group to regain its pioneering role in the media industry in the region.