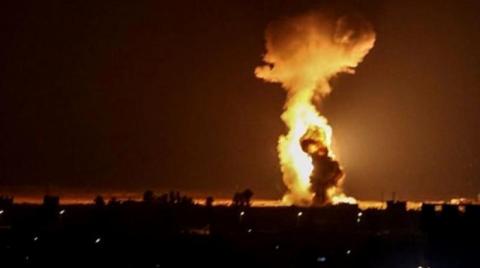 Israeli strikes targeted military sites of the Syrian regime forces, where Iranian militias are located, in the southern countryside of Tartus, where several missiles landed in the vicinity of the village of Abu Afsa, and at an air defense and radar base in the area.

The official Syrian news agency, SANA, reported that an Israeli air attack targeted “points in the vicinity of the coastal governorate of Tartus.” Earlier, official Syrian media had reported that the air defenses had confronted “enemy targets” in the skies of the province, after hearing the sound of explosions. It added that the raids were carried out by Israeli planes from over Lebanese territory.

Several violent explosions resounded at the sites, while ambulances rushed to the area to rescue the wounded and evacuate the dead, without knowing the number of casualties so far.

The Syrian Observatory for Human Rights reported that in addition to the presence of Iranian-affiliated militias in the area, there are also warehouses for the Lebanese “Hezbollah”.

Later yesterday evening, the regime’s media reported that the raids had killed 3 soldiers and wounded 3 others.

In turn, Al-Arabiya TV sources reported that the Israeli raids targeted an Iranian and a Syrian officer who were supervising an operation to transfer missiles to Hezbollah.

It is noteworthy that this Israeli targeting is the 19th on Syrian territory since the beginning of the new year 2022. On July 21, the Syrian Observatory documented 8 deaths as a result of Israeli strikes on military sites in the vicinity of the capital, Damascus. According to the sources of the Syrian Observatory, the dead are “3 of non-Syrian nationalities and two workers with the Lebanese (Hezbollah) were killed by targeting a site for manufacturing Iranian drones in the vicinity of Sayeda Zainab.” In addition, 3 Syrian fighters were killed by targeting military sites and air defense batteries in the vicinity of Al-Mazzeh Military Airport.