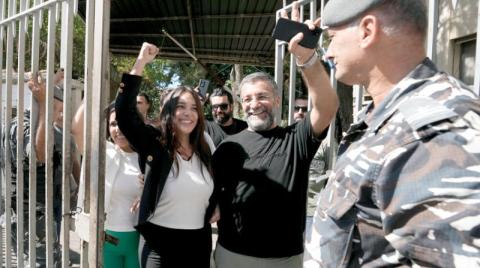 Berri to Asharq Al-Awsat: We are waiting for an American response to our suggestions

At a time when Israel revealed a new gas field off the shores of Haifa, its prime minister, Yair Lapid, announced his rejection of Lebanon’s demands to amend the draft maritime border demarcation agreement, and threatened to stop participating in the negotiations and that any military action against Israel would lead to “Lebanon paying a price.” exorbitantly.”

Lapid explained that the new Lebanese conditions are blackmail for Israel and entail a retreat from the spirit of the agreement, and in the event that Lebanon continues to be dragged behind “Hezbollah”, Israel “must be ready for any development, and it is ready.”

He added that Israel will focus its efforts on pushing the company to extract gas from the Karish field, which is supposed to take place at the end of this month, and deliberations took place on how to respond, if Hezbollah decided to implement its threat to bomb the field.

Lapid made it clear that Israel will not give up its security and economic interests, even if this means that no agreement will be reached soon.

In Lebanon, officials downplayed the importance of reports that spoke of Israel’s rejection of the Lebanese proposals to amend the draft maritime border demarcation agreement, and said that they were waiting for the American envoy, Amos Hochstein, to inform them of the Israeli position.

Parliament Speaker Nabih Berri told Asharq Al-Awsat that “Lebanon does not deal with media leaks, but rather with facts that are supposed to be reported by the American envoy to whom we limit our contacts.”

Berri said that “the Lebanese remarks are simple, and they were discussed with the American envoy and before they were officially sent,” noting that what is happening now is “internal Israeli electoral skirmishes that do not concern us.” He concluded by saying that Lebanon is waiting for an official response from Hochstein, “to build on what is required.”
… More